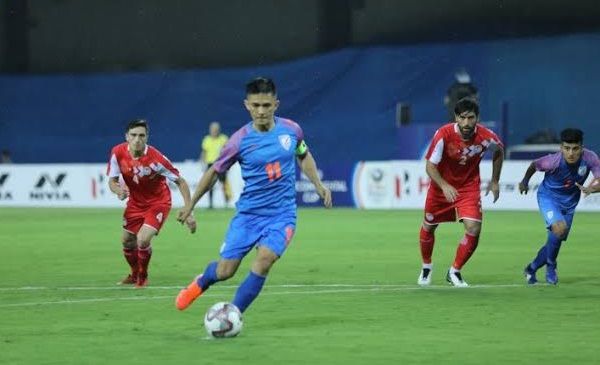 India is all set to take on Bangladesh in a Group E Asian Qualifier match for the FIFA 2022 World Cup on Tuesday. The game will take place at the Salt Lake Stadium in Kolkata. Watch India vs Bangladesh, FIFA World Cup 2022 live streaming on Hotstar and telecast on Star Sports. India recently played a draw with Qatar and portrayed their immense growth in the game. India held Qatar to a goalless draw in Doha last month. Igor Stimac, the new head coach, has taken a series of steps to introduce new faces in the team.

India will be motivated by the return of Chhetri

The face of Indian football, Sunil Chhetri, will return to the Indian side in the game against Bangladesh. The team felt his absence in the game against Qatar as he could have proved to be a game-changer. Chhetri’s return will boost the morale of Blue Tigers as they seek their first win of the campaign. After all, Chhetri has 72 international goals — the second-most among active players, after Cristiano Ronaldo of Portugal (95). India’s recent form has not been good

India lost to Oman 1-2 in their campaign opener in Guwahati. The team is currently at fourth place in the five-team table with one point from two games. Bangladesh is at the bottom of the table with zero points in two games. Talking about the head to head statistics, India lead by a fair margin of 15-2. The major loss that India will face is that it will be without Sandesh Jhingan, the wall of the Indian side. Jhingan suffered an Anterior Cruciate Ligament (ACL) injury in the game against Qatar and will be out for a couple of months.

The Star Sports Network has the exclusive broadcasting rights of all the Indian matches of the World Cup Asian Qualifiers. Star Sports 3 will telecast the much-awaited game. Hotstar will provide India vs Bangladesh, FIFA World Cup 2022 live streaming of the game between India and Bangladesh.