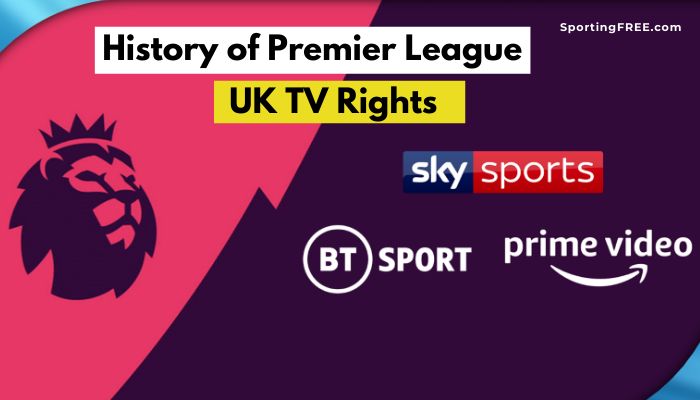 The craze for EPL can be credited to the superstars in the league’s roster and the competition amongst the traditional six big clubs that have a massive fan base across the globe. The English Premier League earn annual revenue of €2.2 billion from domestic and international TV rights.

English football entered a new era in 1992 when the English first division went under a major renovation. The Premier League was formed and came with a set of new rules and changed the way media rights were handled, proposing a more profitable module.

The launch of the Premier League on Sky Sports made improvements as subscription-based broadcasting was introduced. Sky used encryption of the satellite signal, therefore, restricting access to the ones who have not subscribed to the matches.

They also brought in an elite panel of pre and post-match analysts, increased the number of cameras across the pitch to get a clearer and more variety of camera angles.

A history of the Premier League’s UK TV Deals

Let’s take a look how Premier League UK TV rights grown since its formation in 1992.

The initial deal for the term of five years starting from 1992 was signed with Sky sports. There was a total of 300 games for the price of £191 Million, averaging to £0.6 million for each match.

The 2016-19 deal saw the emergence of a duopoly between Sky and BT Sports as the figures inflated. There are 504 matches played for the cost of £5.1 Billion, costing roughly £10.2 Million per match.

The rights have been on the rise since then except for a minor blip in 2004-07 till the latest deal signed from 2019-22. The broadcast rights were sold for £5.1 Billion (70% increase from the previous term) but slumped to £4.5 Billion (11% decrease) on the current term.

The International broadcast streams of the match are another major income for the league. The initial contract from 1992 to 1997 was sold for just £40 Million to BBC, while the same rights were sold almost five times to Sky for domestic broadcasting. The 2016-19 contract was sold for £3 Billion to BBC.

Naturally, the big clubs take the lion’s share in the income generated. 50% of UK broadcast revenue is split equally between the 20 clubs.

A quarter of the income of UK broadcast revenue is paid in “Merit Payments” depending on the place in the table.

The race for the world’s most popular football league has seen tough competition at home between broadcasters to get hands-on TV rights.