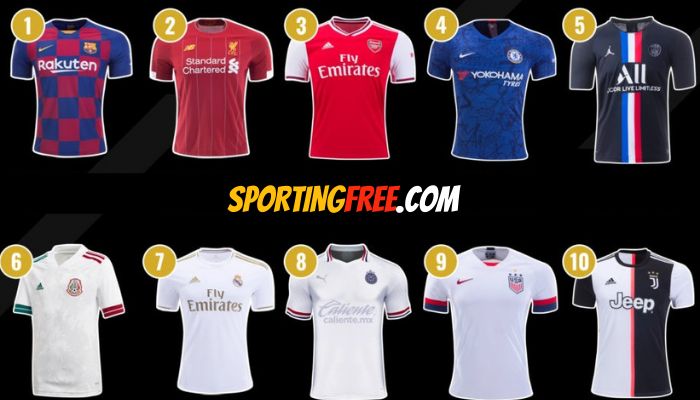 Football and fans are a loyal relationship, where all your emotions are invested with the team and not just a particular player. Every fan wants to become a part of their favourite club, and if there is one way that they can show their association and affiliation with a club then it’s by dawning their jerseys. Thus, jersey selling is one of the major sources of income for the clubs. Hence the article will update you with the top 10 highest selling football clubs jerseys.

Yes, football club’s jersey plays a huge significance in any fan’s life, annually waiting to see the new changes to the jersey’s colours yet with the roots of the original colours.

A jersey is released in the offseason that is during June- July. Hence the list of highest selling club soccer jerseys is based on the sales of jerseys from January 1 to 23rd May.

The Old Lady from Turin is surprisingly at 10th position. Considering they have Cristiano Ronaldo the sales are expected to be much higher, although it seems that the popularity of other clubs has outgrown the popularity of Juventus hence they are at 10th Position.

The good news though for them is that they made it to the list this year because they failed to even make it to the top 10 in 2019.

USA men’s team home jersey made it to the 9th highest selling jersey as many will naturally be shocked at them making the list, as the USA is nowhere to be seen on the footballing map. But it is the reality as the emerging popularity of players such as Pulisic, and Dest has helped them clinched the 9th rank.

C.D. Guadalajara simply known as Chivas is the most popular club in Mexico and it’s pretty evident how much Mexico loves football. The club might not be known to European or Asian fans but they should not be surprised to see this team on the list. Chivas’s third jersey is mainly white with grey and black logos and a blue-white-red detail on the traditional collar.

Los Blancos as the name suggests ‘ The Whites’, the most successful club in Europe has been dawning the traditional white colour since their inception. The team might have lost on some of the sales after the departure of Ronaldo but still manages to clinch the 7th spot making a jump of 3 spots from the previous year.

If a club from Mexico makes it to the list then the country naturally will also make it to the charts. Mexico clinched the 6th spot as their away jersey was sold more than the home colours.

ALSO READ: Most Popular Football Clubs in the World

PSG is the only club from France that makes it to the list and it’s not their home, away, or third kit which was sold the most. Instead, it’s their 4th kit, and evidently though as it’s been manufactured by Jordan. The popularity of Michael Jordon is not a hidden fact and when France’s most popular club collaborates with the world’s best basketball player then the sales are bound to happen.

The Blues from London made an impressive jump to the 3rd position as their traditional blue colours were sold like strawberries at Wimbledon. Many call it the Frank effect as since his appointment there is new hope in the club.

Arsenal is 3rd on the highest selling football clubs jerseys list. There is some glitter of hope after Arteta won 2 trophies for the club after a good drought. Although by sales of the shirt it can be assumed that the fans have good faith in their club.

The Klopp Era Liverpool, as the name only suggests that Liverpool are on their dream run. The 2019 Champions league winners are the most popular club in England and even in the sale of their home jerseys.

Barcelona is the highest selling football jersey club in the world in 2022-21. The checkered design jersey may not have been a success for them in terms of their performance however the design was a huge hit among the fans and not to forget, they have Lionel Messi, which gives the advantage to any jersey in the world.