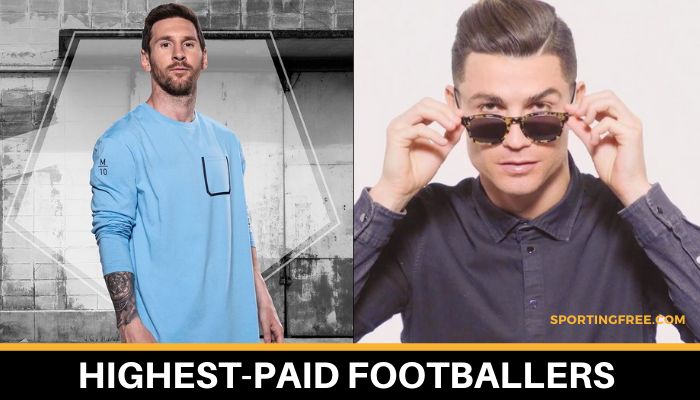 Top 10 Highest-Paid Footballers in the World 2023

The biggest debate among fans is finally ended, here’s the list of the highest-paid footballers in the world.

Gone were the days when football was just considered to be just a Sunday part-time job in western Europe and has now become more of a multi-billion dollar industry with more than thousands being directly involved. The cost at the end of the day is worth it as the viewers and reach it manages to garner is beyond anything else. These skilled and hard-working individuals, who are considered to be the best in the world are therefore claiming a fair share in this thriving system. Here’s the list of the highest-paid footballers in the world. The list features some of the biggest football players.

The footballers usually have multiple streams of income: The salary they get from their club and country, and the endorsement deals. They still have to pay huge taxes and agent fees as the finances involved are astonishing.

Highest-Paid Footballers in the World

Here is the list of the top ten highest-earning footballers in the world.

The Polish centre forward is currently the best goal scorer across Europe. Tearing apart defences across the Bundesliga and Champions league with Bavarians, he led them to a European Treble in the 2019-2020 Season. He extended his contract with the German club in August 2019, making him ply trade with the club till 2023. He makes $24 Million and $4 Million in endorsements. He is one of the best footballer players right now in the circuit.

The Controversial right-winger currently on loan at Tottenham Hotspurs is the most paid British player in the world. Bale makes $23 Million, which is paid partially by both the clubs and $6 Million in commercial deals.

The former Atletico Madrid made a stunning move to direct rivals Barcelona in 2019 has struggled to impress the La Blaugrana fans negotiated a good deal on his switch. Griezmann is paid $28 Million by the Spanish club and makes another $5 Million through his endorsements.

Another French superstar plying trade at the red side of Manchester is making a truckload of bucks. His agent Mino Raiola is considered to be one of the most tedious agents to work with by the clubs managed to get him a $28 Million paycheck per season and makes $6 more Million through his endorsements.

Mohammed Salah is the highest-paid African footballer in the world. The 2-time premier league golden boot winner makes $24 Million as wages and makes another $13 Million through his sponsor deals. Egyptian footballer, Mohamed Salah net worth is estimated to be around $90 million.

The 22-year old Frenchman is rated as a generational talent and moved from AS Monaco to direct league rivals Paris Saint Germain for a whopping $210 Million. He is paid $28 Million and makes another $14 Million through various deals with brands like Nike.

Neymar Jr’s move from Barcelona to PSG inflated the whole transfer market when he made the $263 Million switch. Neymar Sr, who represents his son, settled for a $78 Million paycheck and $18 Million in endorsements. He also negotiated various perks with the club and is currently the Poster-boy of Puma after ending his long association with Nike.

The oldest player, and arguably the fittest, CR7 is still on top of the game. Agent Jorge Mendes got his client a $70 Million per season cheque with the Italian club and makes $47 Million in sponsorship deals and other ventures.

La Pulga is deemed to be the best to ever grace the football field by many. It is, however, debatable if Messi is worth the money or if he is hurting the whole Barcelona pay structure yet his performances on the pitch have always been top-notch. Messi makes $92 Million a year at Barcelona and $34 Million from deals which makes him the world’s highest-paid footballer.