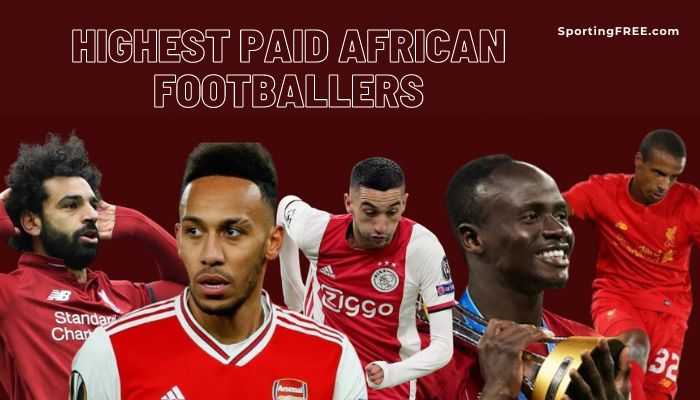 Football as a sport has gained worldwide recognition and has attracted players from all around the world. Africa is known to produce exceptional footballers and many of them have earned a spot in the elite top clubs across Europe and elsewhere. They have snatched handsome deals and are earning hefty salaries. Here is a list of the top 10 highest paid African footballers.

Naby Keita is a Guinean international midfielder who currently plays for Liverpool. He joined Liverpool from the German side RB Leipzig in 2018 owing to his promising performances. He is right now one of the highest-paid African footballers with a weekly salary of £120,000.

Wilfried Zaha is the highest-paid player in the Crystal palace team. The forward has been the most important player for their club. Wilfried Zaha initially represented England but due to limited opportunities, he decided to represent Ivory Coast in 2017. He earns £130,000 weekly at Crystal Palace making him one of the richest players in Africa.

Nicolas Pepe is a promising young forward from Ivory Coast. He was signed by Arsenal in 2019 from Lille. Pepe showcased a remarkable attacking display at Lille which caught the eyes of many clubs. The 25-year-old earns £140,000 weekly at Arsenal making him the 8th highest paid African player.

Sadio Mane is the 7th highest paid African footballer. The Senegalese forward is always a topic of discussion because of his gameplay and contribution to both Senegal and Liverpool. He has had a huge impact in Liverpool since joining them from Southampton in 2016. His goals and assists helped Liverpool clinch the premier league title in 2022. He earns £150,000 per week at Liverpool.

Odion Ighalo came into the limelight when he was signed by  Manchester United in 2022. Before that, the 31-year-old Nigerian was playing for Shanghai Shenhua in China. Even though he was signed as a backup striker, he had a short stint of 6 months and was later transferred to Saudi Arabian side Al – Shabab where he earns around  £190,000 weekly.

Riyad Mahrez signed for Manchester City from Leicester in 2018. He bagged a contract which saw him earning £200,000 a week at Manchester City. The Algerian winger played a pivotal role for Leicester City when they won their first Premier League title in 2016. Currently, Mahrez is one of the highest-paid African footballers in the world.

His attacking gameplay and pace attracted Pep Guardiola to sign him for Manchester City and since then he has scored 35 goals for the Cityzens.

Arguably the best African player currently, Mohamed Salah has become the star face of Liverpool. Often referred to as the Egyptian king by the Liverpool fans, Salah joined the Merseyside Team in 2017 from AS Roma. Within no time he was into the record books for most goals and fastest goals for Liverpool and in the Premier League. Salah earns  £200,000 weekly at Liverpool.

Thomas Partey became one of the costliest signings when he joined Arsenal from Atletico Madrid in October 2022. The Ghanaian midfielder was on the radar of Arsenal for a couple of seasons and was finally signed by them. He earns £230,000 weekly at Arsenal which makes him the 3rd highest paid African player.

Cedric Bakambu’s transfer to the Chinese side Beijing Guoan saw him become the 2nd highest-paid African player in the world. The striker joined the Chinese side from Villarreal in 2018 and earns £307,000 weekly there.

Aubameyang is one of the best African football players currently. The Gabonese striker is known for his shooting and goal-scoring ability. He joined Arsenal from Borrusia Dortmund in 2018 and has gone on to captain the English side. Aubameyang’s transfer and the contract offered to him made him the highest-earning African Player in the world. He earns £350,000 per week.