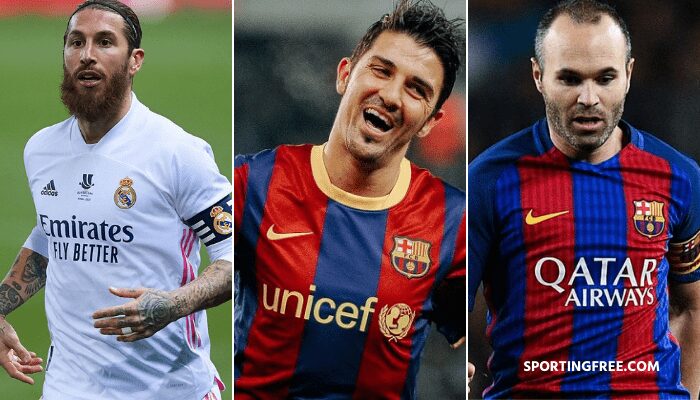 The 10 Greatest Spanish Footballers of All Time

There are many best Spanish football players in the world, but who is the greatest of all?

Spain has always produced the finest footballing talents in the world. There was a time that the Spanish national team dominated not just Europe but the entire world. Over the years, many legends have donned the famous red jersey of Spain. Let’s take a look at the 10 greatest Spanish footballers who have played for the La Roja.

Francisco Gento is known for his illustrious career with Real Madrid. Gento played at Madrid for 18 long years from 1953 to 1971 and was highly regarded because of his pace and vision.

He holds the record as the only player in football history to have won 6 European cups to date. He won 12 La Liga titles with Madrid. Gento played 43 times for Spain between 1955 to 1969, representing the World cup of 1962 and 1966 and scored 5 goals.

Even though his international numbers don’t reflect it, he is one of the greatest Spanish players ever.

Luis Suarez was considered one of the best Spanish football player in the 1960s. He played as an attacking midfielder for Barcelona and Inter Milan.

He won 2 La Liga  2 Copa del Rey with Barcelona and 3 Serie A, 2 European cups with Inter. Suarez made 32 appearances with Spain and scored 14 goals.

He won the 1964 Euros with Spain. Suarez won the Ballon D’Or in 1960 and is widely one of the greatest ever Spaniard players.

FC Barcelona legend Puyol is arguably the greatest leader who captained the Catalan side. Humble, kind, inspirational are the words associated with the legendary defender.

On the pitch, he was equally good in the heart of Barcelona’s defence. His aerial presence and tackling were world-class. He played more than 580 games for Barcelona, where he won 6 La Liga titles and 3 Champions leagues.

Puyol made 100 appearances with Spain and is a World cup and Euro winner.

Fernando Hierro is the fifth highest goal scorer of Spain national team. This is an incredible record because Hierro was a Defender. Hierro spent most of his career at Real Madrid from 1989 to 2003 and made more than 600 appearances for Los Blancos.

He won 5 La Liga and 3 champions league titles with the side. Hierro has made 89 appearances for Spain and scored 89 goals. He is widely regarded as one of the best Spanish defenders, if not the best.

Raul is regarded as one of the greatest Spanish strikers of his generation. With 44 goals in 102 appearances for Spain, Raul is the second-highest goalscorer in Spain’s history.

He spent the majority of his career at Real Madrid. Raul made 741 appearances for Real Madrid and is their player with the most appearances.

He is the third-highest goalscorer of Real Madrid with 323 goals to his name. He won 6 La Ligas and 3 champions league with Los Blancos.

READ: The 10 Greatest English Footballers of All Time

David Villa is the highest goal scorer in Spain’s history. He scored 59 goals in 98 Appearances for La Roja and is Spain’s greatest striker of all time.

Villa was the most important player in Spain during the 2010 World Cup. David Villa has won the 2008 Euros and 2010 World cup with Spain.

He played his club football in Spain with clubs like Barcelona, Atletico Madrid, Valencia. Villa won 2 La ligas and 1 Champions League with Barcelona and 1 La Liga with Atletico Madrid. He is one of the best strikers of his generation.

Xavi is considered one of the best midfielders ever to play football. The midfield maestro was the most vital player during Spain’s and Barcelona’s golden generation last decade.

Xavi played more than 760 times for Barcelona has won 8 La Liga titles and 4 Champions League with Catalans and 1 World Cup, and 2 Euros with Spain.

He is Spain’s third most capped player with 133 appearances. Known for his pinpoint passing, Vision, accuracy, Xavi is one of the greatest midfielders of all time.

Spain’s current captain and most capped player, Sergio Ramos, is considered the best defender of his generation and one of the greatest footballers of all time.

His leadership skills, aerial threat, hard-tackling, goal-scoring ability and world-class defending separate him from other defenders and bring him to the top.

Even though he is a defender, Ramos is known for his clutch time goals and overall attacking prowess. He is the 8th highest goalscorer of Spain with 23 Goals to his name. Ramos spent most of his career at Real Madrid and has won 5 La Liga, 4 Champions League, 3 Super Cups with the club. Ramos has won 2 Euros and a World Cup with Spain.

Casillas is considered to be the greatest goalkeeper ever to play the game. Casillas is Spain’s second-highest capped player with 167 appearances.

San Iker captained Spain during its most glorious years and guided them to 3 spectacular triumphs in Euro 2008, World Cup 2010 and Euro 2012.

He played for Real Madrid from 1999 to 2015 and recorded 725 appearances for the club. He won 5 La Liga, 3 Champions League with Los Blancos.

Andres Iniesta is the best Spanish footballer of all time. 9 la Liga, 4 Champions League, 2 European Championships and 1 World Cup, Iniesta has won everything.

A perfectionist, Iniesta won Spain the world cup by scoring the only penultimate winning goal in the Final and was the player of the tournament at Euros 2012. Iniesta is, without a doubt, the greatest Spanish footballer ever.