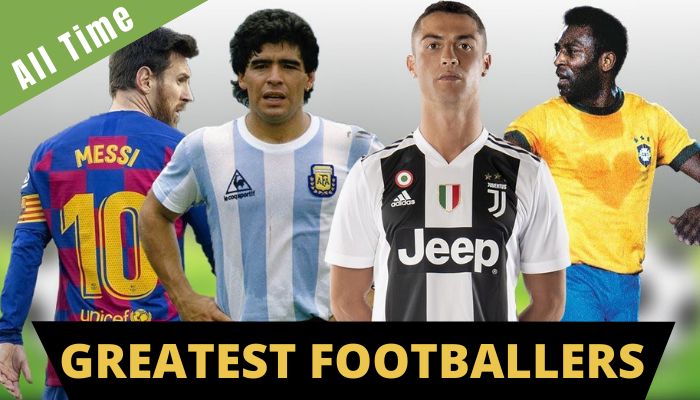 Who are the top 50 greatest footballers of all time? Messi, Ronaldo, Pele or Diego Maradona? The players that are included in the list have ruled the beautiful game of soccer with their skill and talent. Football helped them to express their talent through the shoot, pass and tackle the ball and made them the legends of the game.

Football (Soccer) has influenced almost half the world and changed the life of a considerable amount of men turning them into global stars. The icons of the game are never forgotten and still celebrated even after decades after hanging the boots.

This list includes currently active football players such as Robert Lewandowski, Lionel Messi, and Ronaldo as well as retired footballers who said goodbye to the game. The players have been ranked on the list of the top 50 greatest footballers of all time based on their peak form and achievements.

The 50 Greatest Footballers of All Time

According to SportingFree, Argentina legend Diego Maradona is the greatest footballers of all time. He is the best ever to play the game of soccer and had his fair share of controversies surrounding him even after his playing days. He is also remembered for his goal against England, it is one of the greatest goals of all time.

His amazing ability with the ball was beautiful and his goal-scoring and passing made him the biggest football legend the game has ever witnessed.

Sadly, On 25th November 2023, Maradona suffered a heart attack and passed away at the age of 60.

Pele: Edson Arantes do Nascimento, popularly known as Pelé is a former Brazilian professional footballer who played as an attacking midfielder and as a forward in his 18-year career. He is regarded as the “Greatest Footballer” in the 20th century by FIFA. The TIME magazine include Pele in the list of “100 most important people of the 20th century”.

Lionel Messi: Lionel Andrés Messi is an Argentine footballer who plays as a versatile forward and captains both Spanish club Barcelona and the Argentina national team. The six-time Ballon d’Or winner has been a one-club man his whole career but there are doubts surrounding his future as the summer is approaching when he becomes a free agent.

Messi is arguably the best football player in the world right now and has made entry to our list of the Top 50 Greatest Footballers of All Time. He has scored 469 goals for the Blaugrana club and 71 goals for the La Albiceleste.

Johan Cryuff: Hendrik Johannes Cruijff was a Dutch professional football player and coach. The three-time Ballon d’Or winner was a Barcelona club legend while playing and a successful coach framing the playing style for both Ajax and FC Barcelona.

Ronaldo: Ronaldo Luís Nazário de Lima, is a former Brazilian professional footballer. O Fenômeno had an amazing career even after suffering multiple injuries and medical conditions and was loved by all the football fans even though he played for various rivals(Inter Milan-AC Milan, Barcelona-Real Madrid).

Cristiano Ronaldo: Cristiano Ronaldo dos Santos Aveiro is a Portuguese professional footballer who plays for Seria-A club Juventus. The five-time Ballon d’Or winner is a serial winner who won almost all the trophies there is to win as a footballer. In the total of 888 matches he played at club level, he has netted 670 times.

Zidane: Zinedine Yazid Zidane, also known as Zizou, is a former French footballer and a successful manager. He has scored some fantabulous goals and is considered a national hero in France. He was awarded the Officer of the Legion of Honour in 2008, the highest French order of merit, both military and civil.

Di Stefano: Alfredo Stéfano Di Stéfano Laulhé, or popularly known as Di Stefano is an Argentine-born professional footballer who represented Argentina, Columbia, and Spain at the International level. He has donned for five Spanish clubs but is a Real Madrid legend. He has a total of 521 appearances with 376 goals and died at the age of 88 in 2014.

Gerd Muller: Gerhard “Gerd” Müller is a former German footballer who is known as the prolific goalscorers in the German league and has 487 goals in 555 appearances in his three clubs.

Who do you think, who is the greatest football player of all time? comment below.