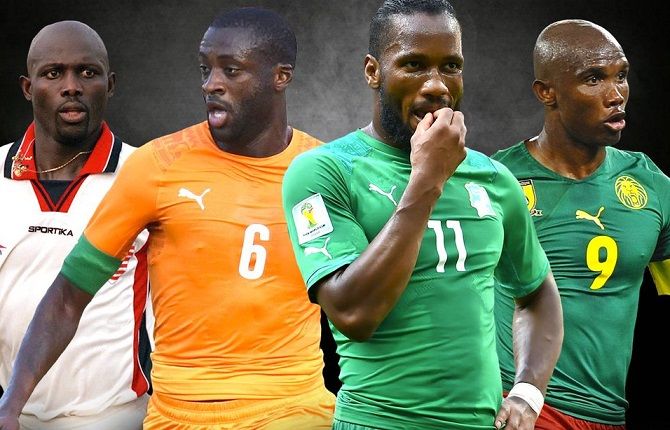 Over the period of time, many talented players hailing from African countries have achieved great success in football. These players have played at the highest level and won numerous prestigious titles during their career. Here we have accumulated the top 10 greatest African football players of all time.

Nicknamed “Mustapha” Madjer is one of the best Africa has ever produced. He spent most of the time with FC Porto and scored one of the most important goals in the club’s history. He scored the winner in the 1987 European Cup final for FC Porto. Madjer won nine major titles with Porto and scored over 150 goals.

Seydou was part of the golden generation of Barcelona. He was a key player in Guardiola’s side. During his stint with Barcelona, he won three La Liga titles, two Copa del Reys, three Supercopa de Espana and two Champions League, two UEFA Super Cups and two Club World Cup titles.

He is the only goalkeeper in this list. Essam won four African Cup of Nations with Egypt and kept clean sheets in four of the three finals. He played for Egypt for more than two decades. The goalie won eight League titles with Al-Merreikh and Al-Ahly.

Former Nigerian international Jay-Jay Okocha was known for his rapid pace and sublime dribbles. He is one of the greatest African football players of all time. His career was about tricks and showboating. Okocha won one African Cup of Nations and Olympic Gold with Nigeria.

Nwankwo Kanu spent most part of his season with Arsenal and Ajax. He is among the only handful of African players who have won the UEFA Champions League, English Premier League, FA Cup, Olympic Gold medal and UEFA Cup. Kanu also won three league titles with Ajax and won African Player of the year two times.

The midfielder played for some of the top clubs of Europe, Barcelona, Manchester City to name a few. He holds the record of most African Player of the Year – 4 times. His exceptional ability to pass the ball and score goals when needed was unmatchable.

Roger Milla was prolific in front of the goal in his career. In 794 games he scored 438 goals. Roger won two National Cup titles with Cameroon and won the African Player of the Year award twice. In the 1994 FIFA World Cup, aged 42, he became the oldest player to feature in the FIFA World Cup.

Fox in the Box, Didier Drogba was one of the greatest African players to play in the Premier League. Former Ivory Coast international Drogba scored over 300 goals in his professional career. He won 4 Premier League titles, 4 FA Cup, 3 League Cup, 2 Community Shields and one UEFA Champions League title with Chelsea FC.

George Weah is the only player hailing from Africa to win both the FIFA World Player of the Year and Ballon d’Or awards. He scored over 200 goals during his career and won three AFCON titles with Liberia, two league titles with AC Milan and one league title with Paris Saint Germain. Currently, he is the president of Liberia.

At number one it is none other than Barcelona and Cameroon legend Samuel Eto. He won four African Player of the Year awards during his playing days. The greatest African football player of all time, Samuel Eto’s career has been filled with trophies. He won two AFCON titles with Cameroon, two UCL titles with Barcelona and one UCL and FIFA Club World Cup with Inter Milan. He scored in both the UCL finals for Barcelona.