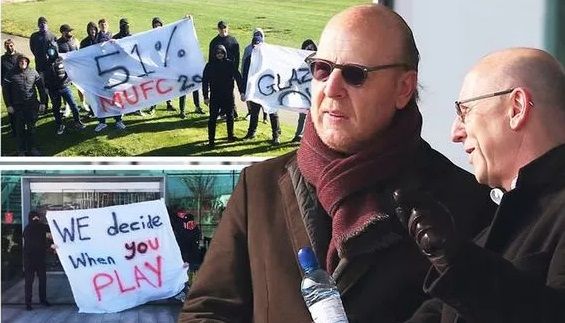 Glazer Family, the owners of famous football club Manchester United are not willing to sell the club despite fans protests in the wake of the Super League. Much has been said about their years of management and the Super League involvement but nothing has come to shore, recent protests have also not moved any feather.

Manchester United fans went in protest against the Glazer family to the next level this past weekend. They storm the pitch at Old Trafford before the northwest derby against Liverpool and eventually forcing the officials to postpone the fixture.

Who is the Glazer family?

Malcolm Glazer was an American businessman who was the President and Chief Executive of First Allied Corporation, a holding company. It for his various business interest. In addition to that Malcolm owned the National Football League side Tampa Bay Buccaneers and the Premier League club Manchester United.

Upon his death in 2014, the family started owning a 90% stake in Manchester United that is equally split among Glazer’s six children. The Glazers acquired the ownership of the club in a £790m takeover. They gradually bought the stakeholders between 2003 and 2005.

The initial years of their ownership were fruitful. But after Sir Alex Ferguson’s departure, none of his predecessors got the required help from the board. Irrelevant signings, lack of connection with the fans, and plunging the club into debts raised signs of protest. Now, the mismanagement coupled with Super League involvement made fans demand their exit from the club.

Despite the outrage, Glazers are here to stay. They only delivered a very blunt apology to United fans for their recent activities. To gain back the trust, the owner’s vision is to raise the value of the club from £3.05bn to £7bn ( $10bn).

The £525m debt has turned into £1.1bn. £704m paid in interest, £244m coming through debt repayments and £125m has been taken out by Glazers simply to fill their pockets. They are paying the majority shareholders at United through dividends. The whole thing has been upside down. Their rare cameos in the stadium are also frustrating.

Despite everything, the Glazers want to stay in ownership, there is also an air of dissolution. Even if the Glazers decided to sell, nobody will dare to take ownership sustaining a £455m debt. The figure is astronomical to be recovered.

Manchester United fans have decided to boycott companies sponsoring the club. This is to put the Glazers family under more pressure. The growing hostility is a sense of fans’ sentiment against their owners. But most of their revolt is going in vain till now. Glazers are unlikely to sell the club at the moment. It can be changed only if government formulates a proper plan to limit these owner’s grab on the club finances.