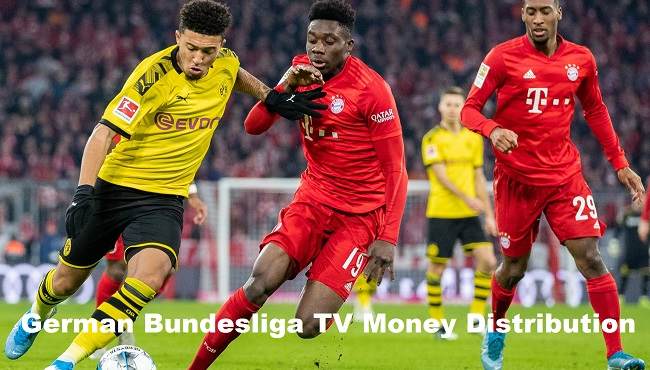 The German Football League (DFL) has made changes its revenue distribution model for both domestic and international broadcast rights. Bundesliga to distribute German Bundesliga TV money equally under the new DFL model

A lot of small football clubs, as well as top football clubs, have suffered financial losses due to the Covid19 pandemic causing a halt in the 2022 Football season. Even after the restart of the 2022 season, Fans weren’t allowed to watch the matches live in stadiums, thus clubs couldn’t make revenue through ticket sales.

So to recover the losses several domestic football federations governing the domestic leagues are trying to bring the distribution of viewership money among the domestic and international clubs.

Germany’s Bundesliga is the first to bring new changes in their TV viewership money distribution. The German Football League (DFL) is changing its profit-sharing model for both domestic and international television rights from next season.

The DFL finalized talks on the new Bundesliga TV-rights package mostly during the global corona-lockdown last spring. SkyGermany and the new DAZN streaming service were the major winners in terms of domestic media partners.

A new way of accumulating TV revenues that caps the top-flight pool to 80 percent will represent a major change in the financial affairs of the Bundesliga. The Combined domestic rights bids are projected to carry the DFL €4.4 billion over four seasons. Also, international media partners, such as ESPN.

Just 25% of TV revenues are evenly split, with the three remaining quarters reserved for clubs meeting success initiatives such as qualifying for the UEFA Champions or the Europa League. Even the clubs, those who are not faced with relegation have long held a valid grievance that the Bundesliga income allocation model arbitrarily suppresses competition.

After the 2022/22 season, Bundesliga Two will earn a record €9 million in TV subsidies. The group of clubs plans to cap the allocation of TV income for the 18 top-flight clubs of the Bundesliga with 80 per cent of the revenue earned.

The new scheme reserves 100% of the revenue for the 18 Bundesliga clubs. The second Bundesliga receives a separate grant from the DFL, which immediately increases by EUR 1 million per year.

The National TV Revenue distribution of football clubs in the first Bundesliga in Germany during the 2022/2021 season.