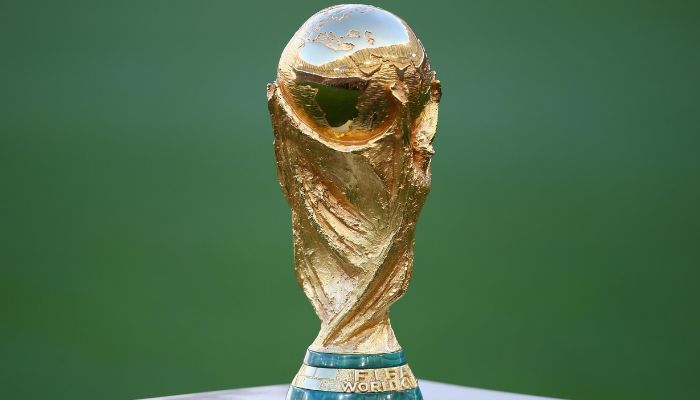 In the 2023 FIFA World Cup taking place in Qatar, 32 soccer teams from over 5 to confederations with some of the world’s most talented footballers battling it out for an esteemed prize: the FIFA World Cup Trophy. Today, let’s take a look at FIFA World Cup trophy history, what is made of and how much it worth?

At the end of the final game of the World Cup, the FIFA World Cup trophy will be presented to the winning team, which will then have its country name engraved on the trophy’s base.

Physical Dimensions and Features of the FIFA World Cup Trophy

There have been two trophies used for the World Cup, the trophy used between 1930 to 1970 was initially named Victory, but later was renamed in honour of Jules Rimet the 3rd FIFA president. Jules Rimet was also the longest-serving FIFA President (33 years).

The Jules Rimet trophy aka Victory trophy was made of gold plated sterling silver and lapis lazuli, depicting the Greek goddess of victory, Nike. It was designed by Abel Lafleur, a French sculptor.

Brazil won the trophy for the third time in 1970, thus they were allowed to keep it, prompting the commissioning of a replacement. The original Jules Rimet Trophy was stolen and never recovered in 1983.

Later in 1964, the next trophy was called the “FIFA World Cup Trophy”. It was made of 18-carat gold with malachite bands on the base and designed by Italian artist Silvio Gazzaniga and made by Italian company Stabilimento Artistici Bertoni.

The FIFA World Cup trophy was designed such that it depicted two human figures holding up the earth. After the FIFA World Cup Final, the trophy is handed to the champion team’s captain, later they receive a bronze replica which is gold plated to keep.

FIFA also scrapped their previous rule of letting the team who wins the tournament thrice keep the trophy, each team now just receives a replica of the original trophy. With the name of every team to win it since 1974 engraved on the base.

The replica trophy will go on a tour of the world months leading up to the World Cup. Then it will finally be showcased at an event, which will be held at the venue where the FIFA World Cup final will take place during the entire month of the World Cup.

On the final day, Trophy is kept on display at the sideline of the pitch throughout the match

How much the FIFA World Cup trophy is worth?

In 2018 the actual worth of the FIFA World Cup was estimated to be approximately US$161,000, but recent reports suggest its worth is around $20 million.