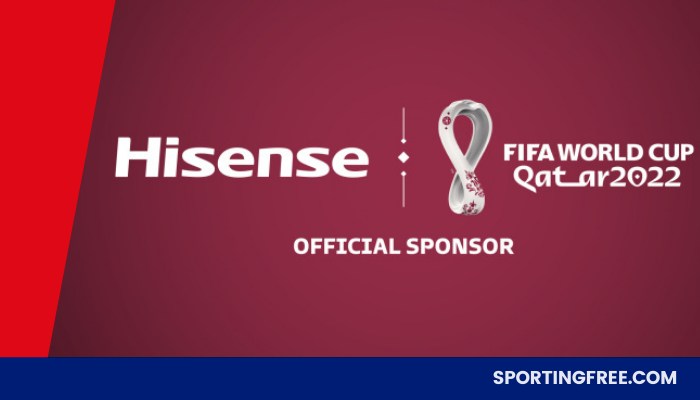 Chinese technology company Hisense has signed a deal with FIFA to become the official sponsor of the 2022 Football World Cup in Qatar.

FIFA World Cup 2022 in Qatar is just a year behind and expectations are building. In the meantime, Chinese technology company Hisense has signed on as an official sponsor of the 2022 FIFA World Cup in Qatar. This has been the extension of their agreement with FIFA to cover the 2022 edition of the tournament after it also sponsored the 2018 World Cup in Russia.

Hisense is the world’s fourth-largest TV maker in terms of unit shipments. They comprise a multinational collaborative research and development system. The company also have more than 90,000 employees working worldwide. It has businesses including multimedia, appliances, IT and the modern service industry.

FIFA is delighted to extended with Hisense. As reported, in the 2018 World Cup Hisense helped the PR growth in China by 12% and globally by 6%. They also performed well in countries like Russia, Spain and Japan. So, it is quite obvious the reason FIFA decided to extend the sponsorship.

It gives me great pleasure to welcome Hisense on board as an official sponsor of the FIFA World Cup, and we are delighted to partner with this internationally respected brand, which also has a growing presence in the sports market.

“FIFA and Hisense are both focused on technology, innovation and giving people the best possible experience. I am confident that this collaboration will support the global objectives of both organizations and contribute to the success of what is sure to be an amazing event next year”

“It helps Hisense build stronger relationships with its global consumers and accelerates the company’s globalization process. It also creates a solid foundation for Hisense to compete with the world’s most innovative and leading brands to also become a premier global brand.”

The FIFA World Cup 2022 is scheduled to take place for the first time in the Middle East, starting from November 12th to December 18th next year. The venue in Qatar has already received backlash for the country’s poor human rights record.

Allegations were made against the harsh treatment of the migrant workers and the lack of proper facilities. FIFA and Qatar have since denied claims stating the conditions has improved significantly.