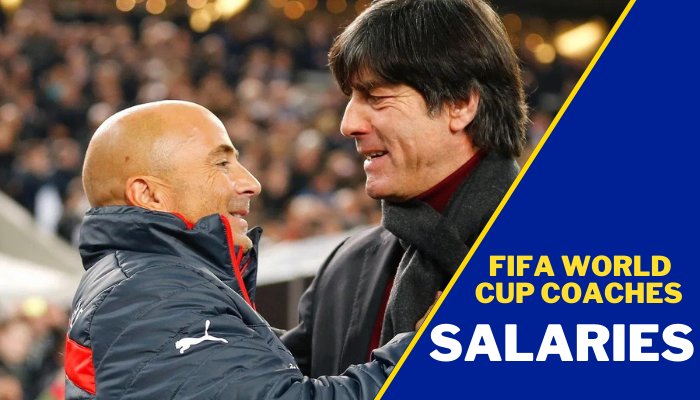 By Siddharth Muruga Last updated May 9, 2021

FIFA World Cup is arguably the biggest sports event in the world. Every footballer’s dream would be to part of a world cup winning squad before they hang their boots. The FIFA World Cup 2023 is scheduled to take place in Qatar from November 21. But do you know how much do the coaches of football World Cup teams earn? The recent report revealed the highest-paid managers as well as all the 32 FIFA World Cup coaches salaries.

According to FIFA, the 2018 World Cup final between France and Croatia reached an average live audience of 517 million viewers, with more than 1.1 billion people tuning throughout the 90 minutes.

Not just the glory, the money that this event brings in is enormous as well. The salary of the players is exorbitant but some coaches at FIFA World Cup still manage to bag some share of the massive finances.

Let’s look at the salaries of the FIFA World Cup coaches of all the teams.

German national team coach, Joachim Löw is the highest-paid coach at the FIFA World Cup 2018 in Russia with an annual salary of €3.85 million. Unfortunately for the defending champions of the 2014 World Cup, Germans crashed out of the tournament in the group stages after finishing last in Group F with a draw and two losses.

French coach Didier Deschamps who won the tournament after beating Croatia in the final was the joint second-highest-paid coach along with Brazil coach Tite with a salary of €3.5 million.

Disclaimer: All the facts and figures about football FIFA World Cup coaches salaries are based on the analysis, research and reports released by trusted sources.