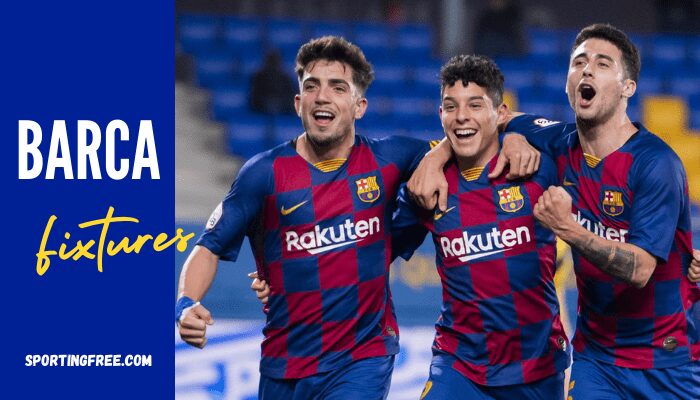 Barcelona La Liga fixtures for the 2022-22 season is released, Blaugrana will meet Real Madrid on October 24 and March 20.

FC Barcelona ended the 2022/21 season with mixed results. Some fans were happy with the team’s development, and some left disappointed after winning the league. A 3rd place finish is surely not good enough given their position towards the back-end of the season.

With the 2022/22 La Liga season set to commence in August, let us look at FC Barcelona’s fixtures and important match-days.

When do Barcelona play their first game?

Barcelona will start off their 2022/22 La Liga campaign at Camp Nou against Real Sociedad on August 15. Ronald Koeman and his players will look forward to put last season behind them and get off to a positive start. Real Sociedad will be a tough opponent, even though the Catalan side managed to complete the league double over them in a convincing fashion.

After the opening fixture, Barcelona will travel to San Mames. A gap of 7 days between both the fixtures. The opening two fixtures can shape the whole season for Barcelona, 2 tough opponents followed by Getafe, Sevilla and Granada.

Here’s the full list of Barcelona 2022-22 fixtures and match dates.

Why This Season May Be the Perfect Opportunity to See FC…

October will be the month to look forward to for La Liga and football fans. Barcelona will go against the top teams, which can decide how the table will look after 1st half of the season. They start off at Wanda Metropolitano on 3rd October 2022.

The winner of 2022/21 season, Atletico Madrid, will like to get the upper hand against one of their biggest rivals. The history between the two cubs makes this match more interesting.

After Atletico Madrid, Barcelona will return home to face Valencia. Valencia will look to get back to winning ways and regain their spot among the top teams in La Liga. The match will take place on October 17th.

When is El Clasico 2022-22 between Barcelona vs Real Madrid?

One of the biggest match in football, The El Clasico 2022-22 will take place on 24th of October 2022. This will be the first meeting of both teams and will want to give their best. It will also be the first El Clasico in many years without Sergio Ramos and first for the likes of Aguero and Depay.

Real Madrid will be without Zidane but with a coach under whom they saw immense success, Carlo Ancelotti. Ancelotti will look to win his first El Clasico, after returning to Real Madrid. The match will be interesting, as always. The return fixture will be played at Santiago Bernabeu or Alfredo de Stefano on March 20, depending if the construction is complete.

With the new season, many new faces in Blaugrana colors will be seen. Barcelona want to get the season started on a high and will be looking to win the La Liga title after 2 long seasons. The fixtures were confirmed by RFEF on June 30th.

Note: All the above given Barcelona’s fixtures and dates are subject to change.