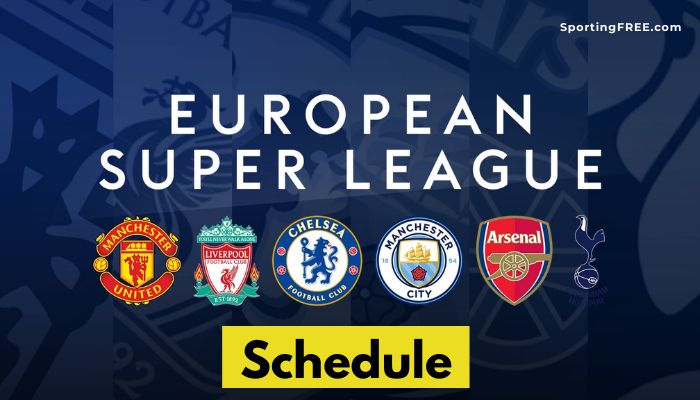 As per the statement released by the  Super League the founding members of the league are the 12 top elite teams across Europe. Teams from Germany and France have not yet approved to join the breakaway competition.

Three additional clubs will be invited before the inaugural season of the competition commences making the total participating teams 15.

The European Super League will feature 20 teams, there would be two groups of 10 teams, with home and away fixtures. Every year five teams will qualify for the league based on the last year’s performance.

The top three in each group will progress straight to the quarterfinals, while the fourth and fifth-place teams would enter a playoff for the last two spots.

The league will kick off in August with all participating team to continue competing in their respective leagues while the final to be played in the last week of May. The complete European Super League schedule and match fixtures will be announced once the conflicts between the league other football bodies resolved.

A women’s version of the Super League will also be formed. The fixtures will be held throughout the year and the matches will be conducted mid-week.

The founding clubs will receive a payment of €3.5 Billion which is more than the combined payment of UEFA’s Champions League, Europa League and Super Cup.

Who will manage the European Super League?

Real Madrid president Fiorentino Perez will act as the President of the Super League, Juventus president Andrea Agnelli and Manchester United Co-Chairman Joel Glazer will be the Vice Presidents of it.

The decision to the formation of the European Super League came just before UEFA was set to announce changes and alterations to the Champions League competition. UEFA was going to expand the number of participating teams in the Champions league to 36 from the current number of 32 and add two wild card slots.

FIFA which is the regulating body of football has condemned this announcement and has said that it would bare strict consequences for the participating clubs. FIFA, UEFA, the English FA, RFEF, FIGC, the Premier League, La Liga, Serie A have condemned the formation of the league and has said that the clubs concerned will be banned from playing in any other competition at domestic, European or world level, and their players could be denied the opportunity to represent their national teams.