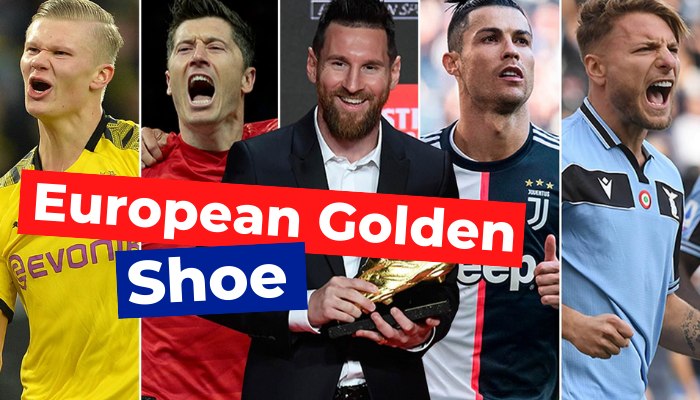 European Golden boot is given to the top striker across Europe’s football leagues. Ciro Immobile is the current holder of the prize after winning it last season. This time though it will be a hard task to repeat his feat as many potent goalscorers have emerged in the European Golden Shoe 2023/21 standings. Lionel Messi is the record holder of the prize by winning the award six times.

The European Golden Shoe is gifted not only to the striker with the most numbers of goals but also the number of points he has gathered. The points are calculated on the weight of the highest-ranked leagues in Europe. So, you may see some players outside the top five leagues with more goals yet trailing someone with less but in the big leagues.

Simy’s goals have not kept Crotone afloat in Serie A but that doesn’t mean he didn’t have a season to remember personally. He is just one shy of reaching his last season tally that helped the club promotion first place.

Another excellent season in Ligue 1, Ben Yedder’s strikes led Monaco to challenge for the title. The 30-year-old Frenchman combined with Kevin Volland made one of the most clinical duos in Europe. He has also racked up 6 assists in the process.

The 21-year-old has been a solitary hope of Fiorentina’s downward season. Signed from Partizan in 2018, Vlahovic has stepped up in his second season. The Serbian have also drawn major interest from big clubs in Europe.

From a super sub to a regular goalscorer, Luis Muriel’s career reversal is spectacular. Atalanta is thankful to have the Colombian scoring from them and in lots. Muriel’s precision and composure in scoring beauties are just top-notch.

Last season award holder is behind this time. But that doesn’t mean Immobile isn’t consistent. His impact has been the same for Lazio as his team look for a place in the Champions League. Even at the age of 32, he’s not slowing down.

Suarez was forced to leave Barcelona because he was deemed old. Yet at the age of 34, he is having a cracking individual season at Atletico Madrid. He might even win the La Liga title. After all, it wasn’t a good idea to leave out the fifth highest active goalscorer in history.

The Egyptian King would have scored a lot more goals for Liverpool if not for their ill faith. Mohammed Salah has been the only bright spark of a fragile attack. It is left to see if he inspires the Reds to at least get into the top four at the end of the season.

Weghorst’s brilliant scoring form has helped Wolfsburg gain prestige in the Bundesliga. This time he’s spearheading the club to Champions League football. The Dutch International is also three assists away to reach double-figure both in goal and assist.

Villarreal have Gerard Moreno to thank for their productive season. The Spaniard’s consistency in output on the pitch has been worth a watch. Moreno is looking forward to guiding the yellow submarine to a Europa League title with his important strikes.

Kasper Junker had a wonderful season at FK Glimt. His haul of 27 goals is more than most strikers in Europe’s top five leagues. The 27-year-old Dane is now plying his trade for the Urawa Reds in Japan in the J league after staring for the Norwegian side.

Romelu Lukaku helped Inter to Scudetto triumph and simultaneously breaking Juventus’s dominance of nine years. He is absolutely a hero at the club. The Belgian goal poacher unreal dominance in the attack lift off Inter to a major silverware since 2010.

Kane is probably having the best season of his career in contributing goals at Tottenham. He has managed to produce 13 assists in addition to his 21 strikes. The English striker is also heading towards another golden boot in the Premier League. Although his future remains unclear at the moment.

Benzema’s classy season is allowing Real to fight on two fronts I.e La Liga and the Champions League. The Frenchman is ever-present inside the box to knock home now and then. Taking full responsibility on his shoulder, Benzema is finally becoming a leader at the camp.

The 26-year-old striker from Nigeria has caught the eyes of the big spenders. Paul had a remarkable campaign with the Belgian club scoring 29 goals. Onuachu’s positivity in front of the goal is a great element to sustain. He will be wishing to make the next move in his career.

Silva has refound his scoring feet this campaign with Frankfurt. With 25 goals to his name, he is one of the top scorers of Bundesliga. The Portuguese have also made his assurance to be in the national squad of the upcoming Euros. Silva will be desperate to keep his graph high.

This has been another impressive showing from the 22-year-old speedster. Maybe Kylian is playing his most decisive campaign with Champions League and an exciting Ligue 1 season on sight. The French star will be wishing to grab more goals come to the end of the season.

The Norwegian is an insane goalscorer. Nicknamed ‘the terminator’, Haaland has already smacked in 36 goals since joining Borussia Dortmund in 2023. The club will be poised to reward him with UCL football this season otherwise it will be hard to contain him.

The Portuguese megastar is carrying loads of a broken Juventus team. Unlike his team, Cristiano is charging up his batteries even at the age of 36. He will be wishing to add in a few more to overtake his rival next on the list.

Of course, it’s Lionel Messi. Even though there is no confirmation on his Barcelona future, the 33-year-old is drawing insane numbers on the pitch again. The Catalan giants are in a title race all thanks to the Argentinian’s tenacity of scoring. But he’s not leading the rest of the pack.

Robert tops the standings of European golden shoe 2023/21 and all the credit goes to Robert Lewandowski. And who else? The Polish striker pulled out the hat of finding the back of 32 times. More than anyone else in Europe. Although injuries caused him to miss a month or so without action, he will be thrilled to be back to add their list and eventually claim the European Golden Shoe to his name.