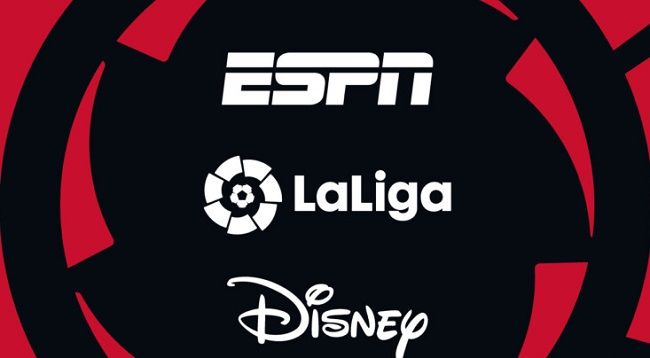 American Multinational media broadcaster ESPN has announced in a statement that they’ve secured a deal with La Liga to broadcast the league’s matches in the United States. The American broadcaster, ESPN has signed a $1.4 billion La Liga US broadcast rights deal.

Currently being broadcasted by Qatari-based beIN Sports, ESPN will stream both in the USA and in Canada the live and on-demand coverage of all 380 La Liga matches next season with both Spanish and English commentary.

Terms were not disclosed but Sportico reports that ESPN would pay roughly $175 million annually, with the total value approximately $1.4 billion.

Walt Disney is the major stakeholder of ESPN and has started dominating other sectors beyond Hollywood recently with 80% ownership. With over 15 sister channels, and over 39 million podcast monthly listeners in 2018 after venturing into audio streaming platforms.

beIN SPORTS’ Managing Director for the U.S. and Canada Antonio Briceño stated that “Sometimes in business, you have to make tough decisions, and this was a difficult one. We’ve been with since the beginning of this channel, but times have changed, and we need to adapt to make sure the business stays, and that it’s not just attached to one or other rights.”

La Liga this season has been the most exciting in recent times with Atletico Madrid, FC Barcelona, Real Madrid, and Sevilla all in the race to be the champions.

Atletico has lost the huge lead they gathered in the initial phase of the league with FC Barcelona gaining momentum as the season progressed. Real Madrid has been the silent horses the whole season while Sevilla took a massive stride towards the top this season.

The La Liga might be in danger of losing a chunk of their viewership as the future of FC Barcelona star Lionel Messi has been uncertain since the end of the 2019-20 season.

Of the big 5 European football leagues, English Premier League is broadcasted by NBC Sports. While Bundesliga, Serie A, and now La Liga are broadcasted by ESPN+, only Ligue 1 will be broadcasted by beIN Sports. Local league Major League of Soccer is broadcasted in English on ESPN (most games), ABC and Fox, in Spanish on Univision Networks.