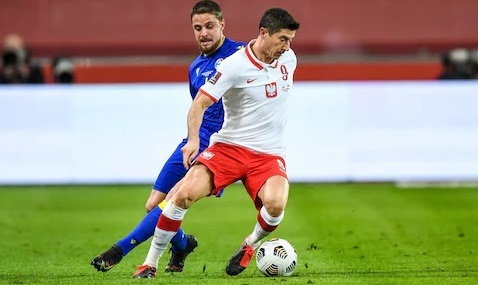 Poland is up against England in the World Cup 2022 Qualifier game, Here’s how to watch England vs Poland live streaming free on today, March 31. Get a TV channel, how to watch online, news, and kick-off time details.

England will face their toughest test in the March month’s leg of World cup qualifiers when they face current second-placed Poland in Group I. Coming in after a couple of well-rounded victories against minnows Albania and San Marino, the three lions will look to finish on top before the qualifiers resume in September. Paulo Sousa’s Poland might be happy with a point given the injury to their skipper Robert Lewandowski who limped off on Sunday. Fans are not allowed inside the stadium due to pandemic but they can watch England vs Poland live stream online as well as on Tv.

When To Watch England vs Poland Live Coverage?

Gareth Southgate’s England host Poland at Wembley Stadium on 31st March at 7.45 pm GMT. Therefore, the match will be telecasted at 12.45 pm PST in the United States and 12.15 am IST on April 1 in India.

The match will be telecasted on Sony Ten 2 or the Sony Liv live streaming in India. ESPN+, Fubo TV, ESPN App will stream England vs Poland match in the USA.

The match can be viewed on ITV1 and ITV Hub in the UK and can be Radio streamed on BBC Radio 5 Live.

England will be without Marcus Rashford and Bukayo Saka who were withdrawn from the squad after getting injured earlier and might field the same starting XI they had on Sunday. Poland will be without their Bayern Munich star striker Robert Lewandowski who is out for 5-10 days due to a knee injury.

Karol Świderski is expected to be the replacement upfront who scored the last goal in the 3-0 win over Andorra. Shot stopper Lukasz Skorupski and midfielder Mateusz Klich will be out after testing positive for COVID-19.

The tournament so far for the teams

England has been on a scintillating form in their first two games for the qualifiers after scoring seven goals. The most promising stat is that England had 6 different goal scorers and none of them are over the age of 30.

The Three Lions have a good backline as they have not faced a single shot on target over the 180 minutes of action. It helped Pope to become the first English goalkeeper to keep a clean sheet in his first six appearances.

Poland had the most exciting match in this month’s International break yet when they battled a 6-goal stalemate against Hungary in their first match.

Poland dominated the whole play and even played with an extra man in the final minutes when Attila Fiola got sent off in the 94th minute. The second match was more smooth sailing when they brushed past Andorra with a 3-0 triumph.