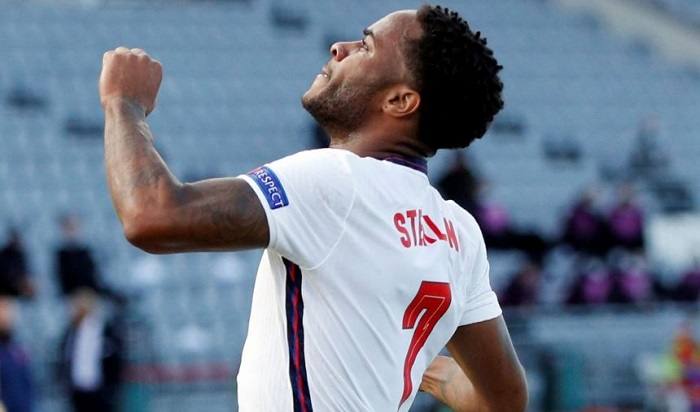 Manchester City and England starlet Raheem Sterling has spoken of his ambition to win this summer’s EURO 2022 on home soil. The London-born forward was raised a stone’s throw from Wembley Stadium and to win a major championship in his own backyard would be the stuff of fairy tales.

In a recent interview with FourFourTwo, Sterling insisted that anything other than winning EURO 2022 would be a “disappointment” for the players and the country. That’s backed up by the fact that England’s Euro 2022 team is set to kick off the tournament as favourites, alongside reigning world champions France.

Although Sterling is yet to enter the prime of his career, aged 26, he will be one of the most senior players in Gareth Southgate’s Three Lions squad this summer. Sterling has represented England at several major tournaments now, with his first as far back as the 2014 World Cup. With seven years of experience in and around the England senior fold, Sterling is well-placed to comment on the national team’s development.

Sterling believes the squad has “got better” since the 2018 World Cup when Southgate’s men fell at the semi-final hurdle against Croatia. Indeed, Sterling argues there is “more ability in the squad now” than there was when England came within 90 minutes of reaching a first World Cup final in 1966. Sterling claims the squad contains more genuine “match-winners” who have a sense of “arrogance” that all tournament-winning squads need.

England’s winning mentality has been brewing since 2018

If Manchester City holds on at the English Premier League (EPL) summit, as expected, to clinch the 2022/21 title, Sterling will have two EPL winners’ medals to his name since the 2018 World Cup.

The England Euro 2022 squad contains several Manchester City and Liverpool players, both of whom have been battling for titles in recent years and, as a result, Sterling believes there is a genuine winning mentality evolving. He insists that if any of the players “haven’t believed” that they can win EURO 2022, they shouldn’t “bother coming”.

The number of players succeeding at club level in the England squad means that several of Gareth Southgate’s key figures could be absent for the pre-tournament warm-up games. Given that Manchester City and Chelsea are set to lock horns in the Champions League final on May 29, up to 11 possible England squad members could miss out on the early June fixtures.

The likes of Sterling, Phil Foden, John Stones, Mason Mount, Ben Chilwell and Kyle Walker will only be allowed to join up with the senior squad on June 5 at the earliest.

Southgate’s men are scheduled to face Austria and Romania in their EURO 2022 warm-up games, but with just 13 possible EURO 2022 squad players likely to be available, Southgate could have to earn his €2m-a-year contract by calling up additional faces to act as standbys for the outright tournament.

Southgate prepares to name his 23-man squad although UEFA rules state that he can now name 26 players for this summer’s championships on May 25.

His hope was to rally the troops from May 29-30 to kick-off the training camp, with a fortnight to build-up to England’s first group stage encounter with 2018 World Cup enemies Croatia.

England’s EURO 2022 group is one of the most fascinating of the tournament. It not only pits England against Croatia in a 2018 World Cup semi-final re-run, but it also sees England face the ‘auld enemy’ of Scotland who qualified for EURO 2022 following a playoff penalty shoot-out against Serbia.

That’s followed by a clash with the Czech Republic who are also dangerous opponents even if they lack the star players of 20 years ago. Winning the group will be of paramount importance to Southgate’s men, given that a runner-up spot could see them face Spain in the last 16, providing the Spaniards win Group E, as expected.

What will Gareth Southgate’s England Euro 2022 Squad look like?

A handful of players are nailed-on starters on Gareth Southgate’s team sheet for the first group stage game against Croatia. Raheem Sterling is sure to be one of them. England captain and EPL top scorer Harry Kane will also lead the line in attack, while dependable centre half Harry Maguire has long been Southgate’s first-choice defender.

In addition, defensive midfielder Declan Rice has forced his way into the reckoning as one of Southgate’s key figures. The West Ham star has demonstrated a maturity beyond his years in the last 12 months at the club and international level and is sure to be a regular starter at EURO 2022 alongside the likes of Jordan Henderson.

The battle for some of the less obvious slots in Southgate’s squad is already hotting up. In the backline, there is genuine competition between Bukayo Saka and Ben Chilwell for the left-back spot, while Chilwell’s club teammate Reece James will be hoping to push Kieran Trippier all the way for the right-back berth. Harry Maguire’s central defensive partner is still up for debate with the likes of Michael Keane, Tyrone Mings and Conor Coady all in contention.

There is some serious competition for the forward-thinking midfield places too. Leicester playmaker James Maddison is fit again and will be hoping to be considered, while Aston Villa icon Jack Grealish is also banging down the door to become an England regular.

Manchester City’s Phil Foden has taken some huge domestic and European games by the scruff of the neck this season and has been likened to Paul Gascoigne. Foden could be the wild card that England and Southgate need in close encounters.

In the final third, it appears Dominic Calvert-Lewin has sewn up the role as back-up to Harry Kane, but Southgate is sure to name at least one more centre forward in his EURO 2022 squad.

Aston Villa’s Ollie Watkins, Chelsea’s Tammy Abraham and Leeds United’s Patrick Bamford are all in contention. Abraham would appear to be the safest option, but both Watkins and Bamford have enjoyed good 2022/21 campaigns and will be itching to be part of EURO 2022 success on home soil.