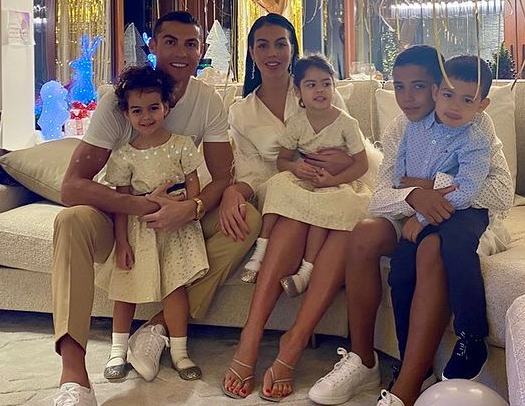 Cristiano Ronaldo – All You Need to Know About his Children: Ronaldo Jr., Eva, Alana & Mateo Ronaldo

Cristiano Ronaldo is regarded as one of the greatest players in the history of football. The Portugal captain currently plays at the Italian club Juventus. It is not a hidden fact that Ronaldo is often in the news because of his performances and records on the pitch, but the superstar also grabs attention when it comes to his personal and private life. Cristiano Ronaldo has four children – Ronaldo Jr., Eva, Alana and Mateo Ronaldo.

Ronaldo is currently in a relationship with Georgina Rodriguez, a Spanish model and former shop assistant. The couple is parents to a girl named Alana Martina.

Ronaldo has four children, his first child is his son, Cristiano Ronaldo Jr who was born on 17 June 2010. Ronaldo then became a father to twins, daughter Eva and son Mateo, who were born on 8 June 2017. He announced their birth after the Confederations cup.

CR7 welcomed his fourth child when his girlfriend Georgina Rodriguez gave birth to their daughter, Alana Martina on 12 November 2017.

Alongside being a leader and influencing personality on the pitch, Ronaldo is an equally kind and loving father off the pitch. He is frequently seen posting pictures with them on Instagram. Ronaldo backs and supports his eldest son Cristiano Jr. when he plays for the youth academy. He makes sure he gets to spend quality time with all his children.

Who is Cristiano Ronaldo Jr.?

Cristiano Ronaldo Jr. is the eldest among the four children of CR7. He was born on 17 June 2010 in USA. Cristiano Ronaldo has never publicly revealed the identity of Ronaldo Junior’s mother and he is the only custodian of his son.

10-year-old Cristiano Jr. is a great admirer of his father. He is often seen cheering and supporting his father in the stadium and accompanying him wherever he goes.

Following his father’s footsteps, Ronaldo Jr is quite interested in playing football and becoming a professional one day. He was enrolled at Real Madrid’s youth academy and played as a forward for them when Ronaldo was at the Spanish club. Since Cristiano Ronaldo joined Juventus, Ronaldo Jr. now plays for Juventus’ youth academy.

Ronaldo said that his son can become whatever he wants and there is no pressure on him to become a footballer. Ronaldo Jr. has impressed everyone with his footballing talent and skills. He has potential, he’s fast well driven.

Just like his father, Ronaldo Jr plays in a forward position. According to some reports, he scored 58 goals in 28 appearances at Juventus youth academy in 2019. The world will have to wait a few more years to see if he makes it to the big stage.

Who are Ronaldo’s twins – Eva and Matteo?

Ronaldo made a public announcement that he had become a father once again when his twins Eva and Matteo were born on 8 June 2017. They were born through a surrogate mother in the USA. Cristiano is often seen posting videos and pictures of him spending time and working out with his toddlers.

Who is Alana Martina?

Alana is the youngest child of Cristiano Ronaldo; she was born in November 2017. Ronaldo’s current partner, Georgina Rodriguez gave birth to Alana and she is the couple’s first own child.