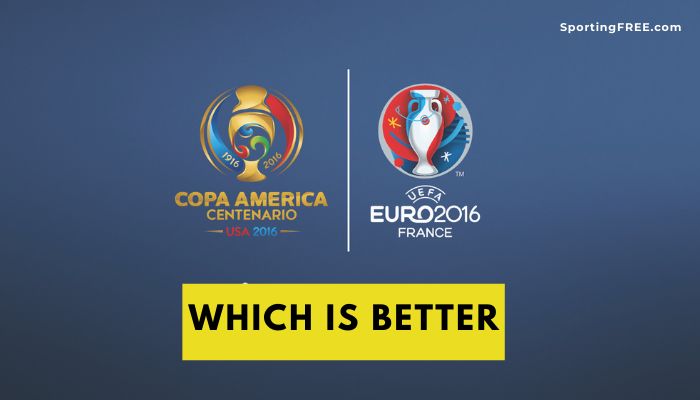 Copa America vs Euro 2022: Which is Better Tournament?

The year 2022 will see the world’s two major football competitions, Copa America and the Euros. The debate about Copa America vs Euro Cup has been going on for ages and has kept the footballing world divided through the opinions for years. It is a well-known fact that both Copa and Euro cup draws fans from all parts of the world and have a massive following. Let’s analyze both the leagues simultaneously to find out which is better: Copa America vs Euro 2022.

Copa America is the oldest international football competition and is the third most-watched competition. Founded in 1916, the competition determines the champion of South America. The members of the competition are   Brazil, Argentina, Uruguay, Paraguay, Chile, Peru, Colombia, Venezuela, Bolivia, Ecuador.

These 10 teams are permanent members and always participate.  Since the 1990s, teams from North America and Asia have also been invited to participate. Since 1993, the tournament has generally featured 12 teams – all 10  South American teams and two additional teams from other confederations.

Eight of the ten South American national teams have won the tournament at least once. Ecuador and Venezuela are the only teams yet to win the competition.

Uruguay has the most championships in the tournament’s history, with 15 cups, followed by Argentina with 14 cups. While the current champion, Brazil, has nine Copa America titles. Argentina, which hosted the inaugural edition in 1916, has hosted the tournament most times.

The Euros is the primary association football competition contested by the senior men’s national teams of the members of the Union of European Football Associations (UEFA). This competition determines the continental champions of Europe. Euros was founded in 1958 and is held every 4 years.

Euros have considerably more participation than the Copa America. 55 teams are eligible to play out of which 24 teams contest in the competition. Unlike the Copa, all the eligible teams have to go through a qualification process and no invitee country can participate.

The 15 European Championship tournaments have been won by ten national teams: Germany and Spain each have won three titles, France has two titles, and the Soviet Union, Italy, Czechoslovakia, Netherlands, Denmark, Greece and Portugal have won one title each.

To date, Spain is the only team in history to have won consecutive titles, doing so in 2008 and 2012.

Euro plays fair with a proper qualifying process and play-offs over an 18-month period to pick the final list of teams. This fair play means that big guns can miss out on the competition and smaller countries can participate. The Netherlands failed to qualify for the 2016 Euros. This element makes the Euros more competitive.

Euros attract big sponsors and the prize money is also a lot bigger. In the 2016 Euros, the champion collected $9 million; whereas the winners of the 2016 Copa America collected $6.5 million prize money. Euros attract the most viewership but that does not undermine the quality of Copa.

Both the competitions, Copa America and Euro cup have equally exceptional talents with them. If the euros have Ronaldo, Griezmann, Ibrahimović, Ramos, the Copa has Neymar, Messi, Cavani and Suarez.

Each competition has its unique virtues and vices and hence claiming one competition superior to the other is incorrect.