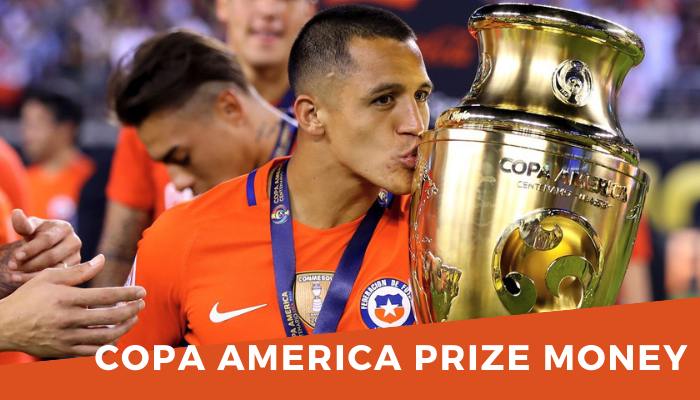 Copa America 2022 Prize Money: How Much Money Do Winners Get?

Copa America Prize Money: The winners of the Copa America 2022 could receive up to $6.5 million in total.

The Copa America 2022 is all set to conclude in a couple of weeks, with the final on July 10. After one year delay due to Covid-19, Argentina and Colombia pulled their hands from the hosting duties while Brazil came to the rescue. The total Copa America 2022 prize money reportedly announced is $19.5 million.

For the second time, the tournament will be hosted by two countries. The prestigious event involves a huge amount of money. Reigning champions Brazil took home a whopping sum of $6.5 million last year. We’ll see how much the winning team eligible to take home Copa America prize money in total.

The winning team will get 6.5 million dollars along with the Gold Cup. There is no change in the prize money of winners from the last edition. The reason could be Covid-19. Along with Prize Money and a trophy, the winning team gets several cash rewards from sponsors.

The estimated amount involved in Copa America 2022 prize money distribution is estimated to be 21.5 Million dollars. The amount will be distributed among Winners, Runner Ups and Participating Teams.

The second-best team of the Copa America 2022 will get 3.5 million dollars and a Silver Cup. Like the winning team, the other finalist also gets many cash prizes from sponsors and their respective federation.

Teams whose journey ends at the semi-final stage also get an ample amount of money. A team finishing the tournament in third place will get 3 million dollars. Whereas, Team finishing fourth will get $2.5 million.

Teams that qualify for the Quarterfinals will be eligible for the Copa America 2022 Prize Money. Total 8 teams will advance to the quarter-finals stage. Four teams then qualify for the semifinals.

The four losing teams in the quarter-finals of Copa America 2022 will get 1.5 Million dollars each. Teams who will get eliminated at the group stage won’t be taking any prize money home.

The lockout phase of Copa America 2022 is going on right now. Lionel Messi’s Argentina is just a couple of steps short of winning Copa America while reigning champions Brazil is too looking to defend the championship.

Brazil is the holder they have won a total of 9 Copa America titles. The most successful Copa America team is Uruguay, with 15 titles.