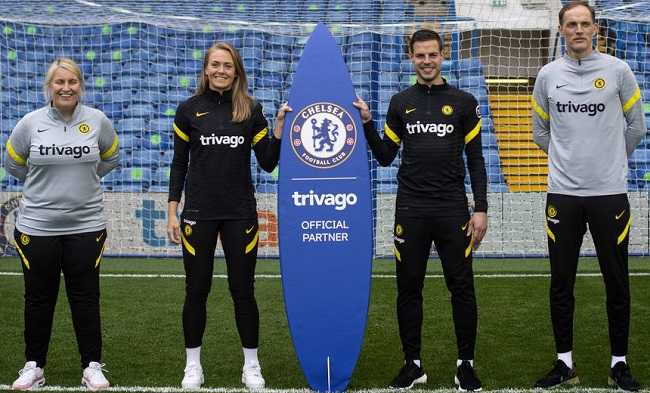 Chelsea FC Training Kit Wear to be Sponsored by Trivago

UEFA Champions League finalist and Premier League club Chelsea has agreed and signed a deal with Trivago making the travel brand their new official training wear partner. The multi-year deal between these two brands will commence after Chelsea’s last fixture of the 2020/21 Premier League season.

Starting next season, Trivago’s official brand logo will feature on all the training kits of Chelsea’s men’s, women’s and academy players. The financial terms of this agreement are yet to be officially disclosed publicly. Along with the club and its players, this agreement is also rewarding for the fans of the blues.

Chelsea and Trivago are starting an integrated campaign, Let’s Go, which will uniquely bring together the best of football and travel and provide the fans once in a lifetime experience.

Chelsea FC Training Kit Wear to be Sponsored by Trivago

As part of the deal, from July 2021, Trivago will be offering fans around the world unique experiences such as opportunities to meet the players, receive coaching sessions from Chelsea’s trainers and gain access to the exclusive Trivago suite at Stamford Bridge under the campaign called Money Can’t buy experiences.

Chelsea chief executive Guy Laurence said: ‘We are all looking forward to that moment when we can travel freely again, whether that is to watch Chelsea or to have a long-awaited holiday away from home, so I’m really delighted to be welcoming Trivago into the Chelsea family. With a global platform that is truly best-in-class, we will be proud to wear the Trivago name on our Men’s, Women’s and Academy training wear.’

Chelsea will battle it out against Aston Villa on Sunday, 23 May for a top 4 finish in the premier league. The blues are also set for an iconic Champions League final against fellow Premier League club  Manchester City on 29th May.