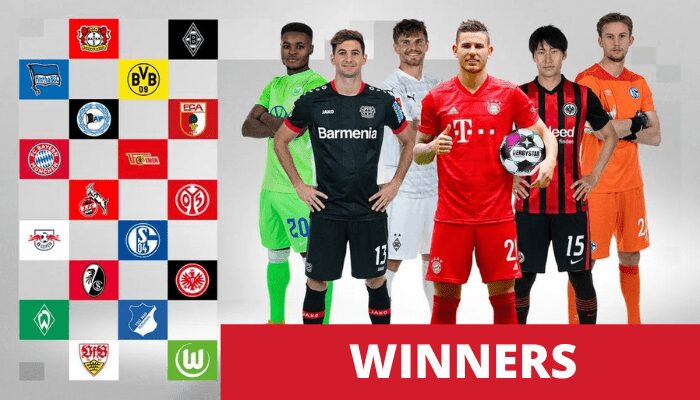 Take a look at the complete list of winners of all Bundesliga seasons.

Bundesliga is the premier association football league in Germany. It is one of the top 5 biggest leagues in Europe and features some world-class clubs like Bayern Munich, Borussia Dortmund, RB Leipzig, Wolfsburg and many other clubs. Bundesliga is preparing to kickstart the brand new season of German top-flight football. Ahead of the new season, here’s the Bundesliga winners list of all time.

Bundesliga 2022/22 is the 59th season of the German league. The season is set to kick off on 13th August 2022. Bayern Munich is the defending champion after winning the Bundesliga 2022-21. But which is the most successful German club? Let’s find out.

Who is the most successful Bundesliga team?

Current champions Bayern Munich is undoubtedly the most successful club in Germany. The Bavarians have won the Bundesliga a record 31 times, including 9 consecutive titles from 2012 to 2022.

FC Nurnberg, who currently play in the second division, has won Bundesliga 9 times, making it the second most successful German club.

Borussia Dortmund has won the Bundesliga 8 times and is the third most successful German Club. Dortmund last won the league in the 2011-12 season.

Schalke, who will miss top flight football in the 2022-22 season has won Bundesliga 7 times