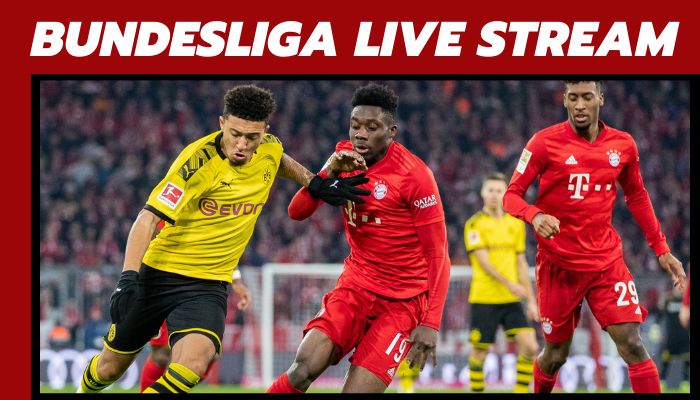 How to Watch Bundesliga 2022/22 from Anywhere in the World

The Bundesliga 2022-21 season is currently going on, Bayern Munich is the table toppers with 68 points followed by RB Leipzig at the second spot with 61 points. The leading goal scorer the season is Robert Lewandowski with 35 goals while Thomas Muller heads the assist chart with 17 assists. The Bundesliga 2021 is available across the world, here’s how to catch the action of Bundesliga live streaming online and on TV channels.

Bundesliga is a professional association football league in Germany. It is one of the top 5 best European leagues and features teams like Bayern Munich, Borussia Dortmund, RB Leipzig, Wolfsburg among many others. It is Germany’s primary football competition and comprises 18 teams.

Watch Bundesliga Live Streaming from Anywhere in the World

In Germany, Bundesliga broadcast rights are shared between Sky Deutschland and DAZN. DAZN will show three games every week and costs €11.99 per month (although your first month is free). This service has notoriously strict geo-blocking, however, so most VPNs won’t be able to unblock it. The app supports all the major mobile devices, TV devices such as Amazon Fire, Apple, Android, Chromecast, PS4, Xbox One, Roku, Samsung smart TVs, etc.

Sky, on the other hand, will be showing 266 Bundesliga and 2nd (2.) Bundesliga matches, with six every Saturday, and two every Sunday. The football fans can catch the action of Bundesliga Live stream on Sky Go, and on-demand highlights will be available for every past fixture.

How to Watch Bundesliga Live Online in the UK & US

BT Sport has exclusive Bundesliga broadcast rights in the UK. Subscribers can stream live and on-demand Bundesliga fixtures either via the mobile app or the web player. You can also sign up for an online-only pass for £25 per month.

In the U.S.A. ESPN+ have the broadcast rights and ESPN will be showing Bundesliga matches such as Bayern Munich vs Borussia Dortmund live stream with English-language coverage live online, while Univision Deportes will be providing Spanish commentary.

In France, How to live stream Bundesliga fixtures

beIN Sports is the only official Bundesliga broadcaster in France. It’s showing every match live, but will also offer on-demand replays in case you want to watch two games that start at the same time. You can sign up to beIN Sports for €14 a month, or €15 per month with no long-term commitment.

In Spain, Where to watch or stream the Bundesliga online

MoviStar+ has exclusive rights to show Bundesliga matches in Spain. Current MoviStar+ subscribers can stream Bundesliga live football on MoviStar Deportes (which costs an extra €10 a month), but if you have broadband or TV with a different company, you’ll be unable to watch.

Where to watch Bundesliga live stream in India

In India, Bundesliga matches can be streamed using the FanCode App.