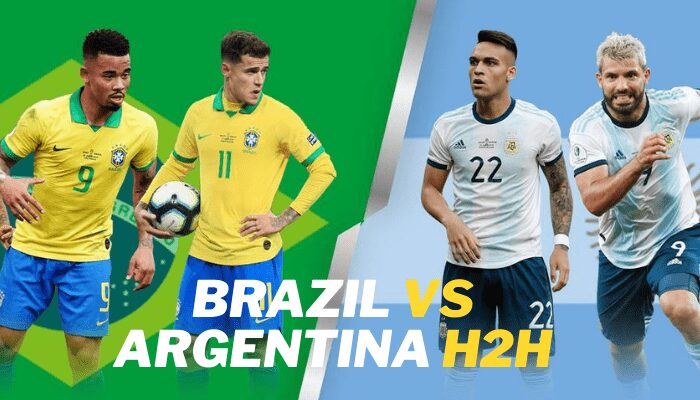 Brazil vs Argentina Head to Head Records and Stats

Complete Brazil vs Argentina Head to head (h2h) records that include match date, result and score.

The 47th edition of the biggest international football tournament of South America, Copa America, is reaching its conclusion as two South American giants Brazil and Argentina, are set to play in the final of Copa America 2022. Estadio Maracana will host Brazil vs Argentina on 10 July 2022.

Copa America 2022 final will be the 112th time these two teams will face each other. The two South American Super houses have met a record 111 times. Ahead of the exciting semi-final, let’s look at the head to head record of the two Copa America 20221 semi-finalists, Brazil and Argentina.

Brazil has a narrow head to the head edge with 46 wins while their Argentine counterparts have won this fixture 40 times while 25 matches have ended in a draw.

The very first match between Argentina and Brazil was a friendly, played in 1914. Argentina won the fixture 3-0. Brazil and Argentina last faced each other during a friendly in 2019.

The last time these two teams met on an international stage was during Copa America 2019 Semifinals. Brazil emerged victorious after a 2-0 win and went on to win the Copa 2019.

Copa America 2022 Semi-Final Prediction: Who will win, Brazil or Argentina?

It is one of the most difficult tasks to predict the winner of the semifinal game between Brazi land Argentina. The game is expected to go extra time to a penalty shootout. Both the teams are in good form and looking confident to play the final. However, Neymar and Richarlison could break Argentina’s wall to play the Copa America 2022 final.