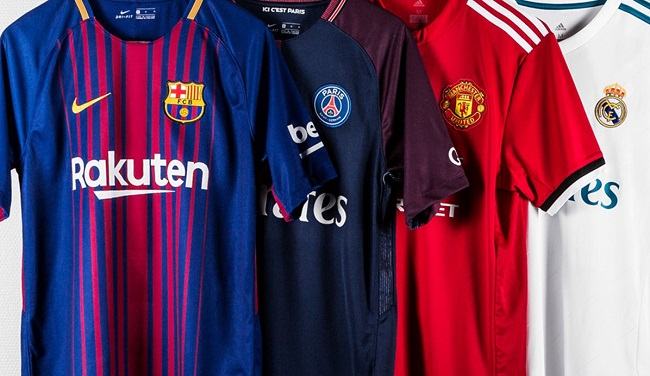 Kit sponsorship is one of the major income that clubs make other than Broadcast rights and Matchday revenue. Some international brands have been long-standing partners with clubs like Italian tyre manufacturers ‘Pirelli’ with Inter Milan after 25 years. Sponsorship deals are an important part of any sports because they help to operate them freely and smoothly. The list consists of the top 5 biggest sponsorship deals in football right now.

The Citizens’ rise to become one of the European elites is fascinating after being acquired Abu Dhabi-based Abu Dhabi United Group Investment and Development Limited On 1st September 2008. They now have a ling term deal with Puma $ 84.13 Mn per season for 10 years.

Their main sponsor is UAE-based Ethihad airlines who have the naming rights to the City of Manchester stadium and is now popularly known as Etihad Stadium who pays $ 58.21 Mn bringing the total income to $ 142.33 Mn.

Paris Saint Germain started dominating the Ligue 1 since the Qatar Sports Investments took over the reins. France-based hospitality company Accor Live Limitless took over as the sponsors in 2019 and is believed to shell out $ 67.03. Kit sponsor Nike spends $ 83.89 Mn per season for the deal.

The Blaugrana are the richest club but, surprisingly, aren’t reliant only on sponsorship as matchday revenues play a huge part in their finances. Japanese-based e-commerce site Rakuten signed a deal starting from the 2017 season worth €55m from Rakuten.

The Spanish side earns a whopping €105m from Nike making it the most expensive deal the sportswear brand has signed with a team.

The Red Devils are the most profitable club in the EPL as Ed Woodward managed to negotiate good deals even after the departure of Sir Alex Ferguson as the team has declined since. The Red Devils will display global technology company TeamViewer logo on their jersey from 2022-22 season replacing American Car manufacturers Chevrolet.

Premier League’s most popular club, Man Utd will make a whopping £235million from the deal. Adidas replaced Nike in 2015 signing a 10-year contract for $97.09 Mn. The sponsorship deal with Chevrolet is the biggest shirt sponsorship deal in football history so far.

President Florentino Pérez has made Real Madrid a commercial juggernaut since being appointed as the president of the Madrid club for his second stint in 2009.

The Los Blancos make a total of $212.27 Mn in sponsorship deals with Adidas chipping in with $134.7 Mn who are the sponsors for the Madrid club since 1998. Emirates Airline signed a deal worth $78.2 Mn per season in 2013. The deal with Adidas and Emirates combine is the biggest sponsorship deals in football right now.