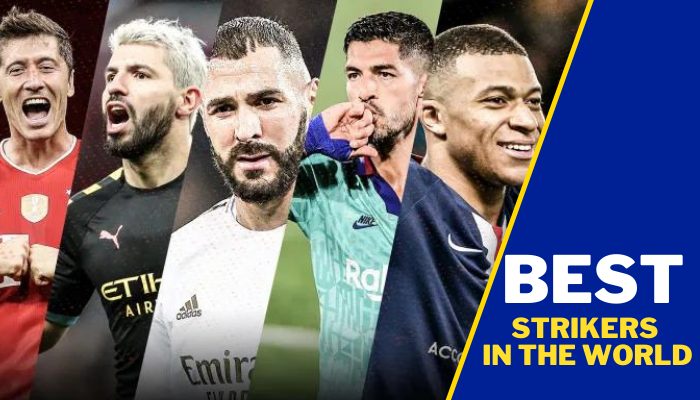 By Siddharth Muruga Last updated May 8, 2021

Football has evolved over the years but the importance of a goal scorer for a title-winning team has stayed constant. The role has however evolved into a more demanding one as the Strikers are now required to have the vision, dribble, pass, and score goals. Here are the top 10 best strikers in the world right now.

You may disagree with the list of the best strikers in world football as it is difficult to rank the players, still we have tried hard to rank the best forward considering all the things.

Romelu Lukaku has become the biggest player in Serie A since his move from Manchester United. He has scored 21 goals this season and is about to lead Inter Milan since their league win in 2009-10 season.

Mohammed Salah is the lone shining star in the gloomy Liverpool season. Salah missed some big chances but still has scored 20 goals this Premier League season.

Andre Silva is finally showing his potential that he initially displayed in Porto. Currently, in Eintracht Frankfurt, Silva has scored 25 goals this season.

Karim Benzema has been a revelation in front of goal since the departure of Cristiano Ronaldo and single-handedly leading the line for Real Madrid with Bale departing on loan and Hazard injured for most of the season. His 25 goals have kept Real Madrid in the tightly competed Spanish League.

Even at the age of 37, Ronaldo is the main man for Juventus scoring 25 goals and leading the Serie A goal scorers tally. Juventus are a pale shadow of their former self this season which might make the Portuguese ponder over his future this summer.

One of the best strikers in the world, Kylian Mbappe is the leading goal scorer in Ligue 1 with 25 goals this season. The Frenchman will be critical for the Parisian club if they want to clinch their first UEFA Champions League this season with PSG already in the semi-finals.

Erling Haaland has been a revelation since emerging in the Champions League with Red Bull Salzburg in July 2019. He has scored 25 goals this season and is likely to leave for a bigger club this summer. Right now, he is one leading and best strikers in the world.

The Argentine is the leading goal scorer in Spain this season with 25 goals. The world’s highest-paid footballer, Messi is not at his peak despite, he is able to manage the third stop on our list.

Even though transfer rumours surrounding his future with Barcelona have been a focal point in media, his performance on the pitch is constantly top-notch.

Harry Kane has been a consistent performer in Premier League since his emergence with Tottenham Hotspurs in 2015. The two-time golden boot winner is on his way to clinching his third this season as he is the leading scorer with 21 goals already and leads the assists in the league too with 13 to his name.

Robert Lewandowski is the best strikers in the world right now and one of the best forward to play football ever. Already having won the Bundesliga Golden boot five times, the Polish striker leads this season’s competition by some margin with 36 goals. He is closer than ever to beat the record of most goals in a season (40) which is held by Gerd Muller for almost 50 years.