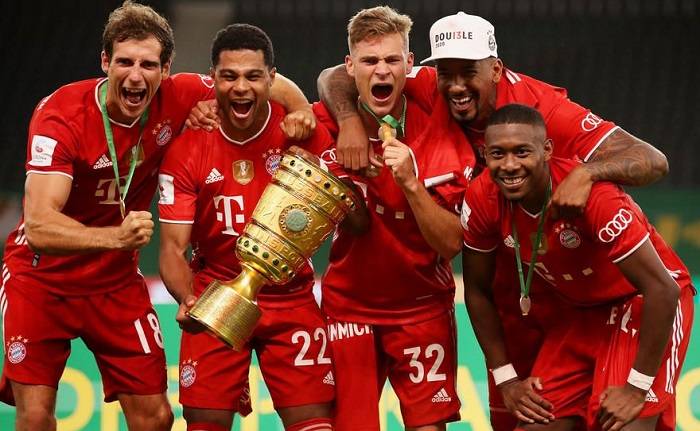 The list comprises the best football teams in the world right now based on their form in recent years. Unsurprisingly, the majority of teams belong to the top five leagues of Europe as these leagues play the most elite and highest level of football in the world.

As the 2022/21 soccer season has ended, it is easy to evaluate the world’s best football clubs.

Liverpool finished the 2019/20 PL season as champions of England. But Jurgen Klopp’s team had a mediocre 2022/21 season.

Injury-hit Liverpool was unable to defend its title as they finished third in the Premier League this season and did not perform well in Europe as well.

This was a season to forget for Anfield and Jurgen Klopp. But Liverpool is still one of the best teams in the world and will surely come back stronger.

Despite ending the 2022/21 campaign at third place in Bundesliga, Borussia Dortmund is still regarded as the best German team after Bayern Munich. Arrivals of new signings like Erling Haaland ensured a cracking season for Dortmund.

The Germans did not go trophyless though as they won the DFB Pokal cup after defeating RB Leipzig on 14 May. They still have the chance to win another trophy as they will play in the German Super cup in August.

United displayed some great football throughout the season but ended up going trophyless once again. The Red Devils reached the final of the Europa League this season but were defeated by Villareal on Penalties.

Ole Gunnar Solskjaer’s side finished runner-ups in the Premier League behind Man City. Guided by their new hero Bruno Fernandes and the arrival of the experienced Edinson Cavani benefitted United as the club is still one of the best in Europe and the World.

Even though Real Madrid failed to win a single trophy this season, it is still one of the best teams in the world. The La Liga title race was the most competitive this season. It was not until the last matchday that Real Madrid ended up 2nd place and conceding the title to Atletico.

Despite a season affected by Covid and more than 60 injuries, Zidane’s side had a great season considering the difficulties faced by the team. Madrid reached the semi-final of the UEFA Champions League but was defeated in the second leg by Chelsea.

Barcelona has slipped down the ranks because of inconsistent and mediocre two seasons. The clues ended La Liga at 3rd place. Lionel Messi is the only reason for Barcelona’s success and its position as one of the world’s best teams.

Messi has single-handedly carried the Catalan side on his back and led them to Copa Del Rey this year. A couple of bad seasons don’t deny the fact that Barcelona is one of the biggest and best football clubs in the world.

Antonio Conte had the biggest impact on Inter Milan as the Nerazzuri went on to win the Serie A 2022/21 under his guidance and leadership. In the last couple of years, Inter Milan has seen a great rise in its form and is performing marvelously not just in Italy but in European competitions as well.

Milan was in the Europa League final last season but ended up as runner-up after losing against Sevilla. With the help of world-class signings like Romelu Lukaku inter has definitely become one of the best clubs.

Atletico Madrid won the La Liga 2022/21. Diego Simeone’s side showed great conviction right from the beginning of this season.

Their free-flowing style of football and the hunger and desire to win was clearly visible since the beginning. Their efforts were paid fruitfully as they won the La Liga title in what was the most challenging and fierce title Race.

The footballing world was not ready for Chelsea’s sudden rise of form. After a horrible start to the 2022/21 campaign under Frank Lampard, Chelsea slipped out of the top 6 at one point. Everything changed for the blues after Thomas Tuchel’s arrival as the manager.

Juventus’ nine-year-long domination in the Serie A ended this season as the Turin side could not win their 10th title in a row. Juventus won the Coppa Italia and the Italian Super Cup this season and is considered one of the best in the world.

PSG is one of the best teams in the world. The Parisians were dominating at the European stage in the last two years after consecutive knockout stage qualifications in the Champions League.

The French Side ended up on the losing side in the Champions League final of the 2019/20 season. In the current season, PSG reached till semi-finals but was knocked out by Manchester City this time. They also had back-to-back Ligue 1 glory but ended up finishing second in the French League this season. PSG has won the French Cup this season.

Manchester City is the second-best soccer team in the world right now. Pep Guardiola showed another of his masterclass as he helped City win the Premier League 2022/21.

Man City also won the Carabao Cup and was in the final of the Champions League which they ended up losing.

Bayern Munich is without a doubt the best football team in the world currently. The Bavarians won the 2022/21 season’s Bundesliga which was their 9th title in a row.

A star-studded squad, a great coach, and a lot of conviction and desire have helped Bayern to reach the top of world football. Bayern had its greatest season last year as they won the sextuple.