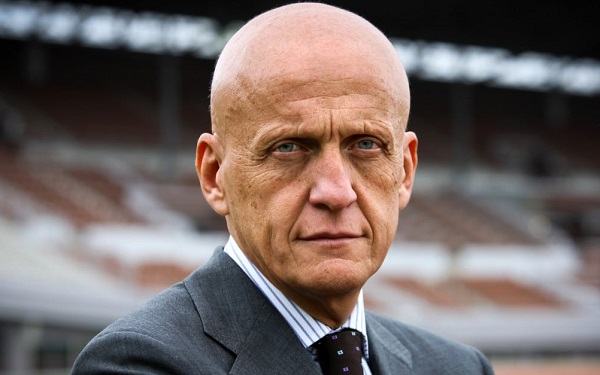 Best referees play an integral role in the game of Football. The main job of a referee is to enforce rules. It might look easy but the referee’s job is complex and demanding. Under the intense situation, even referees are not able to do justice to the game and end up giving wrong decisions.

Best Football Referees Of All Time (2021)

The best referee is someone who knows how to control the momentum of the game and make things under control. In this article, we are going to look at the top 10 football greatest referee in the world.

Frank de Bleeckere made his debut in 1984. He was a FIFA affiliated referee from 1998 to 2012. One of the world’s best referee, Bleeckere was awarded Belgium professional referee of the year record seven times. Frank made his international debut on 24 March 2001. He officiated the match between Cyprus and Ireland at 2002 FIFA World Cup Qualifier.

Frank de Bleeckere officiated in various FIFA tournaments like World Cup, Youth Championship, U-17 World Cup etc. He is the only Belgium referee to officiate in seven World Cup matches.

Oscar Ruiz is Columbia’s best referee. He was FIFA affiliated referee from 1995 to 2011. Since his retirement, he has been a member of FIFA referee instructor team. Oscar made his international debut in 1995. He officiated in three consecutive World Cup (2002,2006 and 2010).

He was also a member of CONMEBOL’s referee assistant Program. 51-year old is also a lawyer by profession.

Hailing from Portugal Pedro Proenca is one of the best referees of all time. He holds the record of the only referee to officiate the finals of UEFA Champions League and UEFA European Championship in the same season.

He got listed as FIFA referee in 2003 and was UEFA Elite referee till 2009. Pedro was awarded Best Referee of the year by Portugues Football federation in 2007 and 2011. Further, he was named as the world’s best referee in 2012 by IFFHS.

Michel Vautrot is one of the greatest referees France has ever produced. He is known for the famous incident at the 1990 FIFA World Cup. Michel added 8 minutes of stoppage times. After the match, he told he forgot to check his watch. During his active day, he was part of a gigantic controversy. FC Roma bribed him before the 1986 European Cup Semi-final.

Officiating 1986 Euro Cup final between FC Barcelona and FC Steaua was one of the silverware of his career. He was also named as the world’s best referee by IFFHS twice.

Retired Danish Referee Peter Mikkelsen is considered as the pioneer in danish referee circle. He officiated in many FIFA World Cup matches. At the age of 30, he officiated two matches at 1990 FIFA World cup.

In 1998 he took retirement. For his composure and precise decisions, he was twice named as the greatest referee of all time by IFFHS. After fighting against cancer, he succumbed to it on 30th January 2019.

Although Sandor is considered as a legend in the world Spanish people can’t disagree more. He is heavily criticised in Spain after he overlooked Mauro Tassotti elbowing Luis Enrique inside the penalty area during injury time at the 1994 World Cup. After this event, FIFA banned for eight international matches.

He officiated the 1994 World Cup final between Brazil and Itlay. Sandor won the best referee award four times in his career. He won it consecutively from 1994 to 1997. Apart from being a referee, he was also the Deputy Chairman of Hungary Football association.

Kim Milton Neilsen was known for his tall look. He was 6 feet 6 inches, taller than most international players. During his career, he officiated 154 international and 53 UEFA Champions League matches. At the age of 28, he becomes the youngest referee to be affiliated by FIFA.

Howard Webb was the best football referee from England. He served as the FIFA referee between 2005-2014. In 2010 he became the first referee to officiate in UEFA Champions League final and FIFA World Cup. For his stellar displays, he also got the FIFA best referee award in 2010.

Before switching career to football he was a sergeant in South Yorkshire Police. Howard Webb declared his retirement on 6th August 2014.

Markus Merk holds the record of officiating the maximum number of German league matches. He made his Bundesliga debut at the age of 25 and become the youngest one to do. He won the IFFHS best referee of the year award three times and german referee of the year six times.

He currently the main commentator of a Turkish Channel Lig TV and also a professional dentist.

The Italian referee won the FIFA best referee of the year award consecutively six times. He started his referee course in 1997. In 1995 he got listed as FIFA referee and remained till 2005. He was known for his bald look and big eyes and due to this he also the nickname ‘Kojak’.

He officiated the 1999 UEFA Champions League Final between Bayern Munich and Manchester United and 2002 FIFA World Cup final between Germany and Brazil.