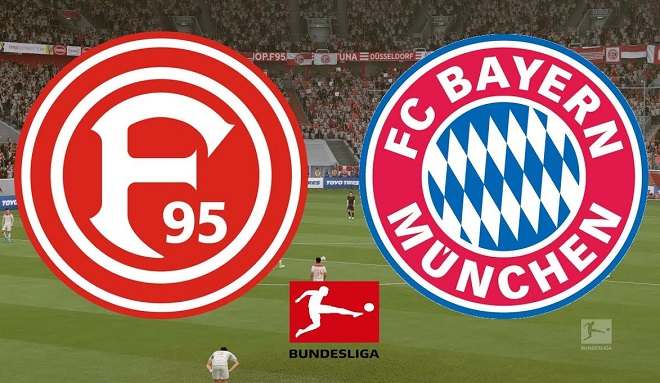 On Tuesday, the top 2 teams on the Bundesliga table locked horns in this season’s last Der Klassiker, and the Bavarians defeated the in-form Dortmund despite Dortmund being on a winning streak. The final scoreboard reflected 1 – 0, Dortmund had started well and been dominating the game in the first half until Joshua Kimmich chipped over Roman Burki in the 43rd minute.

After that goal, Dortmund wasn’t able to make a come back in the game though Erling Haaland and Sancho looked threatening with their shots. Bayern now stands at the top of the table with a comfortable 7 point lead as they bagged 64 points from 28 matches.

Today’s Fixture between Fortuna Dusseldorf and Schalke ended with Dusseldorf boosting their hopes of avoiding a Bundesliga relegation after they made a stunning come back against Schalke. The scoreline after the final whistle displayed 2 – 1, with the first goal scored by Schalke’s Weston McKenzie, scored a diving header at the 53rd minute.

Shortly after that, Rouven Hennings scored an equalizer for the hosts Dusseldorf, and 5 mins later, a header from Kenan Karaman sealed the match for Fortuna Dusseldorf. After the result, Dusseldorf now stands at 16th with 27 points in 28 games.

Here’s how you can watch the Bundesliga match and the required information :

How to Watch Bayern Munich vs. Fortuna Düsseldorf Live Stream in Germany

Home fans or football fans in Germany can watch the Bundesliga matches on Sky Go and Sky Sport Bundesliga 1 as the game is being held behind closed doors due to Covid-19 Pandemic.

Where to Watch Bayern Munich vs. Fortuna Düsseldorf Game Live Stream in the USA

The match will be broadcasted live in the United States on Fox Network. Saturday’s game between  Fortuna Düsseldorf and Bayern Munich will be broadcast on FS1. It can also be watched on fuboTV, which has a seven day trial period.

English fans or fans from Ireland can catch all live Bundesliga action on BT Sport. Viewers in the United Kingdom can tune in on BT Sport 1 to watch the live-action.

There’s now also the option of a BT Sport Monthly Pass, priced at just £25 a month(https://www.bt.com/sport/monthly-pass) on a contract-free basis.

Spanish and Italian fans can catch the match on Movistar and Sky Sport as they hold the rights for coverage of Bundesliga in both countries.

What are the Bundesliga Live TV Channels in the Americas (Canada)

It is officially covered by Fox Sports, the leading broadcaster of Bundesliga in the region. It is available in countries Brazil, Latin America, and the Caribbean. It is covered by DAZN tv in countries like Canada and Argentina.

Sportsnet is the Subscription TV channel to head for Canadians looking to end their soccer drought the channel has exclusive live rights to show this match and the rest of this year’s Bundesliga.

Broadcasters for Bundesliga in Europe

Eurosport 2 is one of the major broadcasters covering this season’s Bundesliga football around Europe. In countries like Albania, Bosnia, Bulgaria, Croatia, Estonia, Hungary, Slovenia, and Serbia.

How to Watch Bundesliga Live Streaming

There are several streaming sites to catch the live-action of Bundesliga around the world. Bet365 is one of them, and they offer German Bundesliga live streams throughout the season. You would have to place a minimum deposit of €/£10, and you will be granted access to the Bundesliga games.

If you don’t have any other means of watching the match, you needn’t worry because VPN service lets you enjoy any game from anywhere around the world. To know more about VPN services, read other articles on our site. ExpressVPN and NordVPN are hugely recommended and trusted VPN sites.