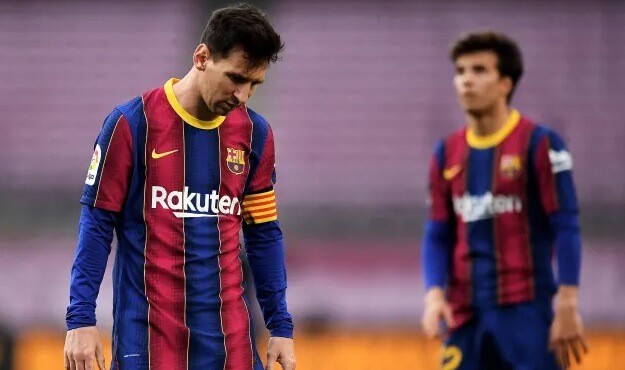 Lionel Messi’s contract at Barcelona is in danger if the club doesn’t cut the wage bill.

La Liga president has warned FC Barcelona that the club will have to part ways with their captain Lionel Messi if they cannot reduce their wage bill 2023-22. Barcelona President Joan Laporta is positive that Messi will sign the contract extension and stay at Camp Nou. But La Liga president Javier Tebas has warned Laporta that the club should maintain the required salary cap of La Liga.

The Catalan club has been in financial woes ever since the pandemic hit. Before the Covid crisis, Barcelona had the largest salary cap in La Liga, which amounted to €671 million in the 2019-20 season. However, the wage cap since the Covid affected 2023/21 seasons is €382.7m. This reduced wage cap meant that Barcelona had to refrain from signing their transfer targets in the season.

Barcelona has been very busy in the transfer market since the conclusion of the 2023/21 La Liga season last month. The club has made some noteworthy signings like Sergio Aguero, Eric Garcia, Emerson and Memphis Depay, whose signing was announced a couple of days ago.

However, even though Aguero and Emerson were signed free, Barcelona’s overall wage bill has increased, adding to the already mounting debts.

Barcelona has exceeded the salary and wage cap, and La Liga can legally obstruct them from signing Messi’s new contract or make any more signings if they overstep the financial regulations. So if they want to keep the captain at Camp Nou, Barcelona will have to make cuts elsewhere.

Barcelona has acquired a gross debt of around €1.2 billion. The Catalan club is desperate to offload high earning players like Samuel Umtiti and Coutinho. Martin Brathwaite, Pjanic, Trincao, Conrad de la Fuente are the other players who might exit.

With limited days remaining in Lionel Messi’s contract, the club will have to make quick decisions about their captain’s future. If Messi remains at the club, he will have to play with a reduced salary and wage. Messi has a weekly wage of £2.1 million and an annual salary of £108.2 million.

FC Barcelona has recently acquired a loan of €525 Million from Goldman Sachs, which will pay taxes, debts, and Barca players’ salaries.