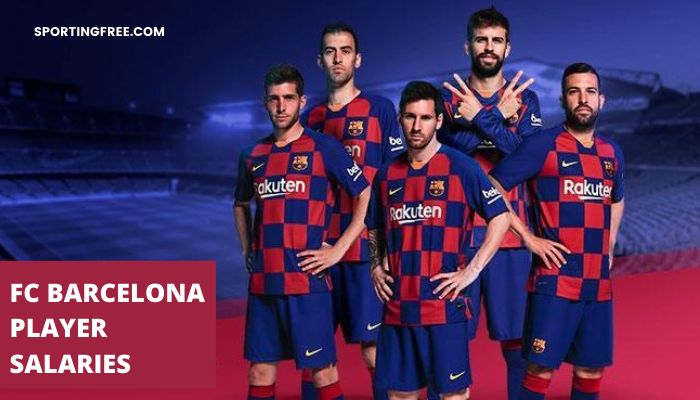 The Covid-19 pandemic has badly affected the budget of Barcelona, as the club has seen a huge downfall in operating income from television rights, marketing and matchday income. FC Barcelona also had to cut down the transfer budget to make up for losses, reflecting in the FC Barcelona player salaries chart for the 2023-22 season.

La Liga has put the salary cap on FC Barcelona for the 2023-21 season, which forced the club to reduce the players salaries. The club has reduced the wage bill according to LaLiga’s guidelines which impacted the signings of players such as Emerson Royale, Eric Garcia, Sergio Aguero, and Memphis Depay.

Barcelona FC is a Spanish Football Club founded in 1899, also known as the Catalans. Barcelona is one of the most popular and supported football teams globally and has the second largest social media following in the world among Football teams. Also Read: Chelsea Players Salaries

After being badly hit by the COVID-19 pandemic last season, Barcelona halted all the investments and reduced staff costs and base budget until things got back to their place.

Only the second richest club in the world, just behind Real Madrid, and that’s mostly down to their success on the field in the last decade or so. Barcelona tends to bring in youngsters through the academy to the first team, but they are not shy to spend big on established stars, as they have the world’s most attacking force with Messi and Antoine Griezmann leading the line-up Front.

Here are the FC Barcelona players salary and contract details for 2023:

Barcelona’s players have won a record number of 11 Ballon d’Or awards, as well as a record number of 7 FIFA World Player of the Year awards. The Sucess lies with Team Management spending satisfying salaries to every club player. Let’s see Barcelona players salaries or who is the highest-paid player at FC Barcelona.

Who is the Highest Paid Player in Barcelona?

Antoine Griezmann is the second-highest earner at Barcelona, with a weekly wage of £345,000.

The Barca club is trying hard to reduce their wage bills for the 2023-22 season. In that process, the clubs have to let go, including Samuel Umtiti, Philippe Coutinho, and Miralem Pjanic.

There is news that the club has agreed to keep Lionel Messi on a 5-year-deal with a massive pay cut.

Here is the list of new signings by Barcelona:

Here is the list of left out players by Barcelona:

Check out the Players Salaries of other Football Clubs: