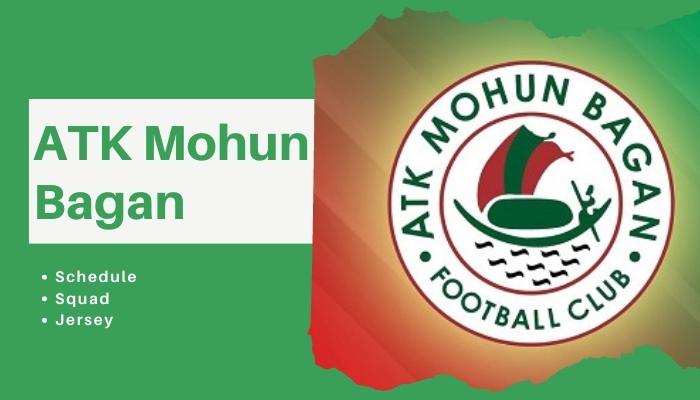 ATK Mohun Bagan FC: Everything You Must Know About The Team

Bengal and football are a match made in heaven literally. It won’t be wrong to say that what Mumbai is for cricket is what Kolkata is for football. Well, let’s be honest who doesn’t know about Mohun Bagan and East Bengal. But do you know about the merger of Mohun Bagan with ATK? Here’re everything about the this ISL team such as ATK Mohun Bagan FC achedule, squad, jersey, logo, merger and players list.

Before knowing about the merger between the 2 successful clubs from Kolkata, we first must know about both the clubs.

It was formed in 1889 and is the most decorated club in India with an astonishing collection of 253 trophies. Gracing the arena of Salt lake, the team has never failed to impress its fan and football lovers. Mohun Bagan is undoubtedly the pride of Indian football and even represents our nation on global books. Talking about books, Mohun Bagan has been registered in ‘Club of pioneers’ as the oldest football club in India.

Atletico de Kolkata is a baby club in football, born in 2014 to compete in ISL. The club is owned by Sourav Ganguly, and Sanjiv Goenka, while the club is just 6 years old but has seen a lot of gold as they have won the ISL 3 times of a possible 6.

Now the question arises is that if both the clubs are successful in their own paths then why did they merge? Here is everything to know about the merger.

In January 2022, it was decided that Saurav Ganguly and Co. will buy 80% stakes in Mohun Bagan and will merge ATK with Mohun Bagan to form ATK Mohun Bagan FC.

The reason stated by Saurav was that Mohun Bagan is the pride of Bengal, but the club was dying financially as the leagues such as I league was dying. Moreover, he blamed the AIFF for disbanding tournaments such as the Durand cup.

Thus he felt the merger was important as Mohun Bagan provided the quality of football and the passion, while ATK provided the finance and platform, and what better platform than ISL. thus Mohun Bagan left the I league to start their journey in ISL 2022-21 season.

Since ATK owns the majority of the stakes, it is very natural to expect that changes will be made to the club’s existing nature and on top of it, mixed sections of fans were fuming over the sale of their beloved club.

However, ATK owners have made it very clear that they themself will maintain the historic roots of the club and won’t damage the image and pride of the club.

The club has decided to keep the historic stripes of green and maroon untouched to not hurt the sentiments of the fans.

The logo retains its essence as the only minor change that has been made to the logo is the addition of the prefix ATK in it.

ATK Mohun bagan will play its first season in ISL this year and there have been major squad incomings and outgoings. Thus the list of the sqaud for 2022-2021 season is as follows.

Roy Krishna has been appointed as the captain to lead the side for the season starting from 20th November. While the schedule and fixtures for the ATK Mohun Bagan FC for ISL 2022/21 season are yet to be revealed.