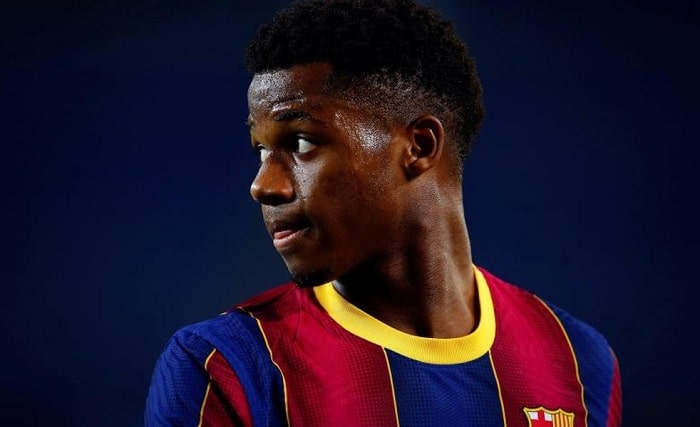 Ansu Fati is a professional footballer who plays for Spanish giants FC Barcelona and the Spanish national team. A talented and young prodigy, Fati is widely regarded as the next big thing in Spain. Ansu Fati’s net worth is likely to increase with the Barcelona FC contract

Even though he is still a teenager, Ansu Fati is already earning good money courtesy of his F.C. Barcelona contract. Fati’s estimated net worth is reported at around €5 million. He earns a weekly wage of £73,000 with the club and an annual salary of £3,796,000.

Ansu Fati was born on 31 October 2002 in Guinea Bissau. His full name is Anssumane Fati Vieira. His family left Guinea Bissau and moved to Spain when Fati was six years old. They lived in Herrera, a suburb of Seville. Born into a family of footballers, Fati joined Sevilla’s academy team in his childhood.

He switched his teams as he went on to join the prestigious La Masia academy of FC Barcelona in 2012. Fati played for the Catalan’s youth academy and gradually climbed up the ranks in the club. He penned his first professional contract in 2019 and secured his La Liga debut even before making an appearance for Barca’s reserve team.

Ansu Fati became Barcelona’s second-youngest player to debut for the club at the age of 16 years and 298 days. The fairytale start to Fati’s career continued as he went on to become F.C. Barcelona’s youngest ever goalscorer and the third youngest scorer in the history of La Liga.

Fati became the youngest goal scorer of Champions League history when he scored against Inter Milan in December 2019. He was promoted to the first team for the 2022/21 La Liga season and went on to become the youngest ever goalscorer in El Classico.

Ansu Fati made his international debut in 2022 as he came on as a substitute for Spain vs Germany in the Nations League match.

Ansu Fati has played 40 matches for FC Barcelona and scored 13 goals so far.

Disclaimer: This article on Ansu Fati net worth is based on reports from trusted media sources, and SportingFree doesn’t claim responsibility for the facts.