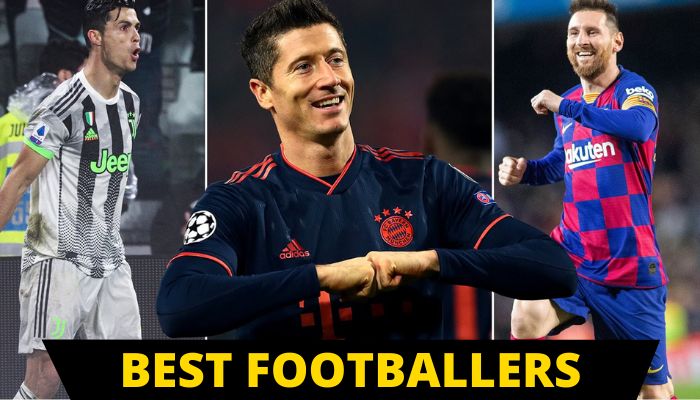 Footballers to many are more than just athletes of the sport. They are icons in daily life too. Talent, hard work, dedication, and love for football have showered them with endless success. Some of the best names have ensured their place in the history of the game. The list of 50 best footballers in the world is based on the player’s current form with their club as well as overall talent.

Over here, we look into five of the best football players dominating their respective leagues and Europe right now. All of them are performing at the highest level in the 2022/21 campaign. Three of them are proven stars of the game while others are upcoming generational talents.

Robert Lewandowski is the best footballer in the world right now. The centre-forward is all set to dominate the coming years. Many fans believe it’s the end of the Messi and Cristiano Ronaldo era and new begins.

Despite struggling through injuries, Robert still leads the European golden shoe race with 32 goals in Bundesliga. Lewandowski’s staggering record made him the second-highest all-time goalscorer in the league.

He got robbed of the Balon d’Or last season due to the pandemic but is very much in the driving seat to receive one in the future. His absence has hurt Bayern in Europe but nothing could stop him to taste another league shield with the Bavarian.

Messi: No doubt, the year 2022 was bad for Lionel Messi, 5’7 failed to give the performance that he is known for. But still, he manages to get the second spot on the list of best footballers in the world which is a bit high compared to his numbers in 2022.

Cristiano Ronaldo: Unlike his club, Cristiano Ronaldo’s season individually has been great again. Now aged 36, Ronaldo has bagged 25 goals in 29 Serie A games with four more in the Champions League. However, his club has failed to reward him for that with lacklustre performances. They have lost title dominance and also are eliminated from the Champions League. Despite all of this, Ronaldo remains the best player in the team by delivering season after season.

Kylian Mbappe: One of the best football players in the world right now, the French wunderkind turned into a sublime footballer. The 22-year-old showed his prolific attitude in front of the goal yet again.

Mbappe has rippled the net 37 times in 34 games till now with PSG still embarking on league and Champions League title. Winning both will round off his best season ever in his developing incredible career. A lot more is yet to arrive from his striking boots.

Erling Haaland: The 20-year-old Norwegian is an insane goal machine. Recognized for his pace, athleticism, and brutal strength Haaland has gone to an unthinkable level. Named as ‘the terminator’, he has bagged 36 goals in 35 appearances in all competitions for Borussia Dortmund this season. Haaland is braced to achieve even more in the future when he decides to take the next big transfer of his career.

Who is the best football player of the decade?

Lionel Messi is the best footballer of the decade and there is no current footballer who can beat the GOAT.

Last year, Messi put a transfer request to leave Barcelona. Fast forward to 2022 and he’s delivering immensely for the club as he usually does. With the relationship paired up, for now, La Pulga has managed to score 33 goals in 39 games.

For his contributions, Barcelona has to lift off from a poor start to the campaign to be a serious title contender. If Messi decides to conclude twenty years stay at the club this summer, he will be desperate to end it on a high.