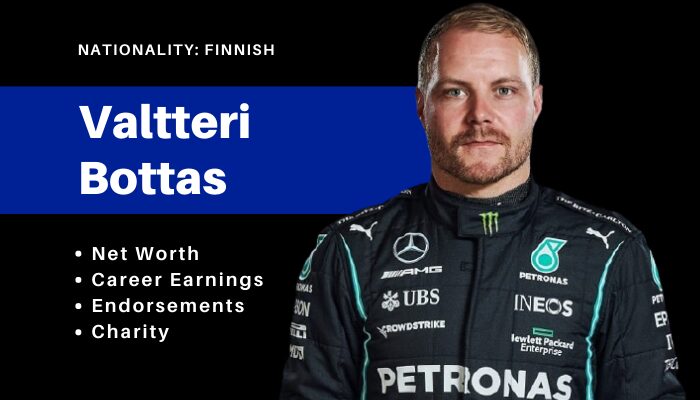 The 30-year old Finn is one of the sports most recognizable figures. Let us take a closer look at Valtteri Botta’s net worth, salary, contract and endorsements deals

Bottas made his F1 debut for Williams in 2013, and since then, he has become one of the best drivers on the grid. He spent 3 years at the British outfit filled with points and multiple podium finishes.

The 2017 season saw the shock retirement of 2016 World champion Nico Rosberg, and Bottas was drafted in to fill the most coveted seat in F1. Since his Silver Arrows debut, he has gone on to win 9 races and finished as the championship runner-up in 2019.

The Finn is said to be worth $20 million. Valtteri Botta’s net worth comprises multiple endorsements deals and his F1 contract.

Bottas was formerly supported by Wihuri and Kemppi, two well-known Finnish organisations. Wihuri is a corporation, whereas Kemppi is a welding firm. Following a disappointing campaign the previous season, Wihuri parted ways with Bottas before the 2019 season.

Bottas has a contract at Mercedes, which runs out at the end of the 2022 campaign. The Finn is reported to be earning a fee in the region of $10 million per season. Valtteri Bottas is expected to leave Mercedes at the end of the year, according to insiders, who claim that the Brackley-based team is unwilling to renew his contract.

Bottas is no longer a must for Mercedes, according to a report released on Instagram by SkySports F1. He might be replaced by George Russell, according to the claim. Finn is one of the highest-paid Formula 1 drivers in the world.