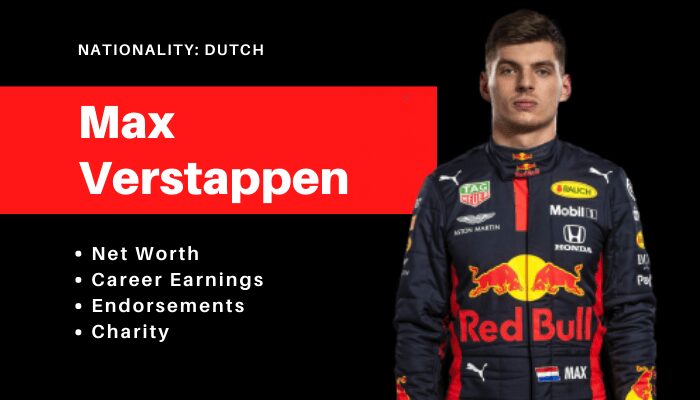 Max Verstappen is surely the next big thing in Formula One racing. Red Bull roped him in 2016 after he won the Spanish Grand Prix. The Belgian-Dutch racing driver has surely come a long way since his debut. It is believed that his best is yet to come. Even though his age is just 23, he pockets a huge salary of $25million from Red Bull that increased Max net worth to $60million.

Verstappen is a rare talent. Aged 17, he was promoted to F1 directly from F3. His first race in Formula One was Australian Grand Prix in 2015. Max Verstappen recently won the French Grand Prix beating F1 legend Lewis Hamilton to become one of the youngest racers to achieve that milestone.

According to reports, Max Verstappen has a net worth of $60 million as of 2022. Red Bull has signed him until 2023. The Dutch international earns a major share of his net worth from his contract with the Red Bull racing team.

Max’s New Contract With Red Bull: Verstappen extended his contract with Red Bull after his existing contract got expired in 2022. He will now race for the Red Bull till the 2023 Formula 1 season. He is the fourth highest-earning Formula 1 driver after the contract extension.

Furthermore, he endorses multiple brands and is sponsored by brands like Jumbo Supermarkets, Ziggo, Red Bull, G-Star Raw, and CarNext.com. The 23 years old is the second most famous F1 racer after Lewis Hamilton.

In 2006 and 2007, he won the Belgian championship and Dutch Minimax championship, respectively. Year after year, he got promoted to upper divisions.

After the continued hard work for years, Verstappen made his Formula3 debut in 2014. He participated in the FIA European Formula 3 Championship for Van Amersfoort Racing.

Formula One Career of Max Verstappen

In August 2014, Max joined the Red Bull Racing junior team. At 16 years and 166 days, he became the youngest driver to compete in Formula One racing when he participated in the Australian Grand Prix and drove for Scuderia Toro Rosso.

In 2016, Red Bull promoted him to the first team. He won Spanish Grand Prix and became the youngest driver to win a Grand Prix replacing Sabastian Vettel.  It was also his first race with Red Bull Racing.

He has won 13 races in total and finished at the podium on 48 occasions. Max Verstappen’s career points total is 1293, and he is yet to win the world championship title.

Disclaimer: All the facts and numbers about F1 driver Max Verstappen’s net worth are based on the analysis, research and reports released by trusted sources.