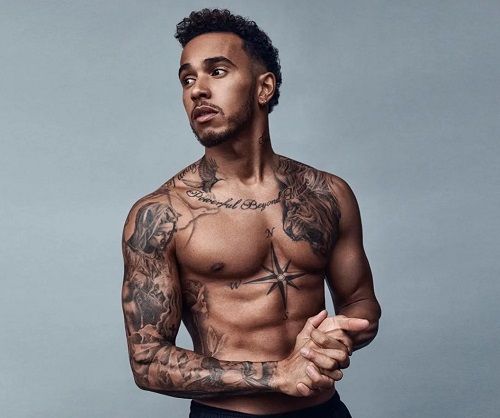 Lewis Hamilton Tattoos and The Real Meanings Behind Them

The British F1 driver, Lewis Hamilton has broken all records and is aiming for the 8th world championship title this season. Lewis is famous for his valour and courageous display on the racing track. But, there is one more thing for which this F1 driver is famous, his tattoos. Hamilton’s body has several tattoos and he likes to get inked.

Lewis Hamilton Tattoos and Their Meanings

One of the most prominent tattoos of Lewis Hamilton is present on his back. A cross with angel wings and words, “ Still I Rise” written on his shoulder blades. Hamilton revealed the inspiration for his back tattoo is late rapper Tupac.

On the other hand, the words “ Still I Rise” is related to African-American poet Maya Angelou. It took around 10 hours for the back tattoo and he did it one go.

Tattoo on Shoulder and Chest

Words “Faith and Family” are written on his shoulder. This shows his close relationship with his family. Hamilton also believes in God and to show his faith he has a neck tattoo – “God is Love”.

There are two tattoos on Lewis Hamilton chest. The first one is the roaring lion, which according to the sources is one of the most liked tattoos by him. Speaking about the tattoo, Hamilton said, “ I am like I am the king of the jungle and lion at heart. I like how lions are furious and aggressive”.

Another tattoo on his chest is a compass showing directions. The tattoo symbolises his religious connection and faith. He said, “ I go to church every Sunday…I have gained my direction where to go and my real compass is Church”.

The most recent collections of Lewis Hamilton tattoos are four new tattoos on his hands. This first tattoo is a swordsman design that represents valour, power, bravery, courage, strength and protection. There is an hourglass on the right on the swordsman design that signifies the flow of time.

On the left side of the swordsman design is a tattoo of his sun sign Capricorn. And the final and last tattoo on his hands shows his love for God. He has the word “ Divine Love” inked on his hand.

Hamilton has always been a fan of tattoos and he is constantly looking what’s next.