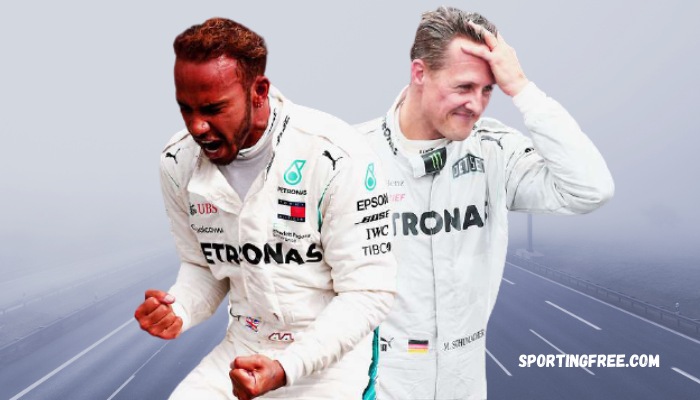 Lewis Hamilton vs Michael Schumacher: Who is the Greatest F1 Driver?

Lewis has already beaten Schumacher’s record of 91 race victories in 2022, whilst he also has the most pole positions in the sport’s history.

In particular, last year there was a lot of talk about who is the Greatest between the two, the former and current riders.

In 2022, Hamilton broke two more Schumacher records, Podium number (163 vs 155) and victory (94 vs 91). In the qualifying round, Hamilton was clear to Schumacher’s 68th, showing clear growth with 97 pole positions. Michael Schumacher, however, has more fastest laps  77 to Lewis Hamilton’s 53.

In the Schumacher era, there was an average of 16 every season. In Hamilton’s time, there has been an average of 19. The number of Grands Prix each year has increased over time.

Apart from the intimacy of championships and triumphs, the combinations on the podium are also very similar.

First, pole positions in the career so far Hamilton has almost 50% more than Schumacher in a considerably shorter career. A reflection of his standing as not only the fastest of his generation but perhaps also of all time. Their numbers of front-row starts tell the same story.

Hamilton also has more effective wins from pole – 56 times compared to Michael Schumacher’s 40 in his Career.

But there are other numbers in Schumacher’s favour. Michael Schumacher has more wins from second, and more than twice as many wins from third.

At first, seeing the stats might suggest that Schumacher was a stronger racer. But when studying Hamilton’s race- strategies would consider him as the great.

READ: Lewis Hamilton Cars List: What cars does Hamilton own?

And from 2003 – so for the final four years of his ultra-successful stint at Ferrari, cars qualified with race fuel loads, which meant it was not always advantageous to start right at the front.

A better race result might be achieved by starting with a heavier fuel load. Which meant a lower grid position but a long first stint on the then very consistent and durable tyres, in which to gain track position.

Conclusion: Who is the Greatest F1 Driver of All Time?

All stats show that both, Lewis Hamilton and Michael Schumacher were the best Formula 1 drivers of their eras and the greatest F1 drivers of all time.

Who is the better F1 driver, Hamilton or Schumacher? It is difficult to say as both were driving different cars in different eras.