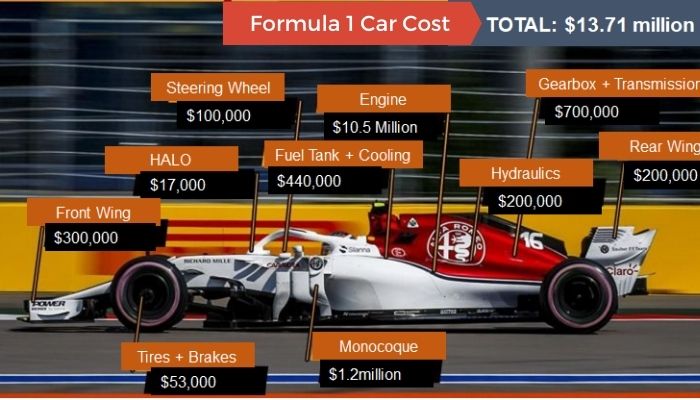 How Much Does a Formula 1 Car Cost?

F1 cars are open-wheeled, open cockpit, single-seater rear-wheel-drive vehicles primarily designed to compete in the Formula One Championship, which must comply with the FIA requirements.

As F1 cars are specifically designed to run on racing tracks and reach top speeds of 350 km/h, and this does come at a reasonably high cost. In simple words, F1 cars worth as much as a team is willing to invest in it; companies spend millions to design and develop their dream car.

To build a Formula One car will cost around $12-13 million. Big Budget teams like Ferrari and Mercedes spend over $400 – $500 million each year on their F1 racing team and cars. This creates an unfair advantage over small budget teams which can’t spend more than $200 – $250 million.

To level the grounds of F1 racing, the FIA has announced a cost cap coming in from 2022 and will foresee that teams are allowed to spend only up to $175m on their F1 cars and matters directly related to performance.

When we calculate the estimated cost of an F1 vehicle, we only manage to calculate the cost of various units and parts but not account the engineering and design costs that are put into the production of these units and components.

Most of the cost is covered by sponsorships by to recover these huge investments teams must bring out their best performance on the track on race day.

The power unit is the heart of the vehicle. It produces power and determines the speed of the F1 car while consuming the minimum amount of fuel. Today’s F1 car engine uses less petrol than the previous V8 engines.

The main component of the Power Unit is the Engine. The performance of the power unit will also decide the team’s progress.

The Chassis, Wings and body of an F1 car cost

The Front and the Rear Wings play a key role in balancing the car as it moves around the high-speed corner. Formula One teams also modify the design of their wings after each race, based on requirements of the track. The front and rear wings are roughly $150,000 and $100,000 respectively.

The chassis is the frame of the F1 car to which all the other parts are mounted and mainly consists of a carbon fibre monocoque, and the monocoque is five times lighter and two times stronger than steel.

A monocoque is made out of 12 layers of carbon fibre mat and weighs only 35 kg but has to take the load of the driver and the other components of the F1 car which adds up to 750kg.

The body of the Formula One car was explicitly designed to withstand the immense stress generated by aerodynamic loads and cornering speeds. The cost of the monocoque and a protection structure for the driver called a halo would amount up to $1,200,000.

The steering wheels and gearboxes are essential for drivers to control the speed and acceleration and direction of vehicles on the race tracks. The steering wheel of an F1 car looks not less complicated than an Xbox or PlayStation controller.

It cost between $60,000 to $100,000.They are expensive because they use advanced technologies and fine-tuned according to the driver’s requirements and can save the driver from probable accidents.

These F1 cars use too sophisticated semi-automatic gearboxes. A right steering wheel costs about $50,000, while gearboxes cost around $440,000 and rank up to $600,000 after significant upgrades.

Tires cost a lot when it comes to F1 racing as they are frequently changed after laps to ensure the right grip and prevent punctures or tire bursts. A single set of tires costs $1715, and each team is given 13 sets of tires for an F1 racing competition.

The yearly spending of F1 teams on tires alone is said to be around $270,000.The brakes and hydraulics of the F1 cars are calculated to cost approximately $170,000.

All F1 teams have insurances for their F1 cars as major damage caused to the vehicle during a race could cost around $650,000 to $500,000 for repairing and alignment.