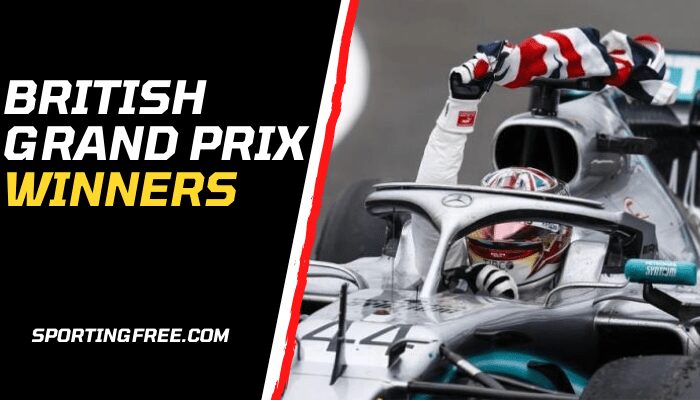 Lewis Hamilton is the most successful formula 1 driver at British Grand Prix with seven victories while Ferrari has won most constructors championships.

The Royal Automobile Club organizes the British Grand Prix, a Grand Prix auto event held in the United Kingdom.  It was first conducted in 1926 and has been a round of the FIA Formula 1 Championship every year since 1950. The British Grand Prix is now hosted at the Silverstone Circuit in Northamptonshire, England, near the community of Silverstone.

Let us look at all the winners of the British Grand Prix and the fastest laps set in the last five races.

Lewis Hamilton saw his left-front tyre fail with half a lap to go. He claimed his seventh and arguably most dramatic Silverstone victory of his career in an astonishing closing few laps of the 2022 British Grand Prix.

The leader’s puncture was communicated to Verstappen. He got on with it and secured the fastest la[ of the race. But it wasn’t enough as he missed out on a victory by 6 seconds.

Hamilton’s teammate Bottas was the man starting from pole. But an eventful race saw the Britton leap-frog the Finn in the pits. The victory was Hamilton’s 6th at Silverstone.

The British driver secured the race win and the fastest lap. He collected the extra point and closed out the 2019 Grand Prix in fine fashion.

Vettel emerged victorious over his Drivers Championship adversary, Lewis Hamilton. The German-made a phenomenal start and comfortably closed out the race.

The Ferrari driver completed a wonderful weekend with the fastest lap of the race to go with his race win.

Hamilton took the race win as he looked to jump his closest title challenger, Sebastian Vettel. The Britton provided a driving masterclass which saw him take the race win with ease. The win helped him close the gap in the title standings to 1 point.

The Mercedes man completed a flawless weekend with the race win and the fastest lap. Hamilton looked strong all weekend long and deliver the goods on race-day.

Who has won the most British Grand Prix?

The British racing driver and seven-time F1 World Drivers’ Champion, Lewis Hamilton, has won the seven British Grand Prix so far, which is the most by any driver, followed by Jim Clark, who has won five British titles.