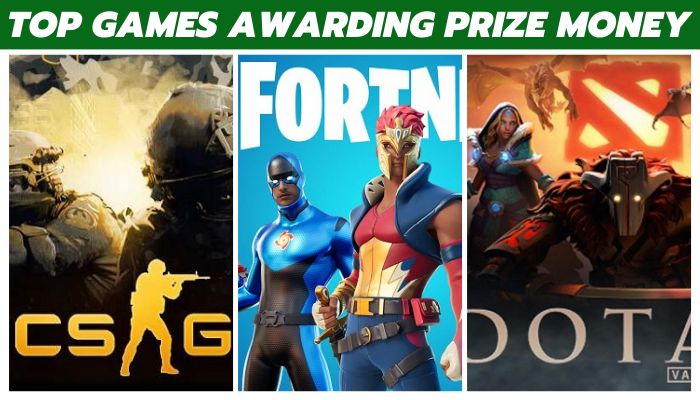 Esports has grown quite a lot over the years not only in terms of popularity but also in terms of Prize pool value. According to various reports, the industry is set to grow by 30% in the next 5 years and is one of the most sought out markets in 2022. In this article, we are going to discuss and know the top 10 esports games by total winning prize pool.

The industry is growing continuously due to the tremendous Money at stake in the tournaments. The global pandemic may have caused a dip in the overall prize money of eSports games but the community does not show any sign of slowing down.

The NBA franchise had always been in a better hand when the ownership of NBA games and products was transferred from EA to 2K Entertainment. 2K entertainment did a great job of producing some visually stunning NBA games over the last decade.

This Legacy of making good and appealing games made the NBA 2K franchise dip into Esports. NBA 2K had a decent beginning in its Esports journey with 2K18 and 2K19 having successful ventures in the initial stage.

NBA 2K20 on other hand solidified the NBA games as a great esports option with private and local tournaments in and around the USA. If you are good at NBA games you should give it a try to win one of the biggest prize money by esports game.

Rocket League is a very different game that came out of nowhere in 2015 and took the world by storm. The entire gaming world had only witnessed FPS, MOBA, RTS, and Simulation games but Rocket league was an original idea born out of the mix and match of the developers. The developers often call the game a”Racing simulation-based soccer game”.

Though the game was weird to many it was extremely fun to play. This Fun aspect turned into a competitive aspect scene over the years. Today rocket League has teams from big organizations like G2, PSG esports, Cloud 9, and Ghost Gaming.

Blizzard is always known to make great games that are played and remembered for a long time. Hearthstone was one such product that came from the womb of such developers. This card and the turn-based game is an extremely competitive game that requires the players to take swift and intelligent decisions.

This game was included as an official medal game in the recent Asian Games and was chosen as now of the tiles at the Olympics.

The game has a very good esports scene and the interesting part is this scene involves players from all parts of the world making it very unique as each player bring their style of play representing the region.

PUBG is a world phenomenon and was an instant success upon its release. The gaming community can be easily classified on the basis of PUBG as Pre-PUBG era and post, that was the level of impact that PUBG brought to the world of Games.

The players and users have never experienced the battle royale before PUBG. Twitch streamers who streamed PUBG during its initial time -2017 also catapulted their fame a most famous and notable example was “Shroud”.

This craze of PUBG brought the battle royale genre to the Esports foray. In 2019 PUBG conducted its first championship and was a huge success on its initial instalment. The esports game, PUBG has one of the highest prize pool.

The 5vs5 shooter genre was popularized by counter-strike in the early 2000s and was made even more interesting by “Team Fortress” but in 2016 Overwatch took the 5 vs 5 FPS genre to another level. The characters in the team fortress were extremely likeable and the gameplay was nothing that was seen before.

The game also managed to bring the Asian market into the FPS Scene for the first time, the Asian scene was known for its RTS and MOBA scene primarily.

The Esports scene is so big that an Overwatch world cup is held between more than 100 countries. Some of the notable names that came from overwatch are Sinatraa (Valorant Pro ) and Mendokusaii(Apex Legends Pro).

Ubisoft is a world-class game developer who is often known for its great AAA titles like “Assassin’s creed” “Prince of Persia” and “Splinter Cell” but it also secretly managed to nurture a small title called Rainbow Six over the years. The title in 2015 got a new release in the name of “Rainbow Six Siege “which a sleeper hit upon its release.

Initially, the game was filled with bugs and Other server-related issues. But over time the developers have managed to fix all the issues and the game started to gain momentum among players and in 2022 Rainbow is one of the most played Paid games in all of the world.

Fortnite is one of the most popular games on the planet. It is a kid-friendly battle royale game that is loved all over the world. It was one of the games that had a great Esports scene from day 1 because of the competitive nature of battle royale.

In 2019 Fortnite had hosted its first with a 30 Million USD but due to the world pandemic, the prize money of most of the games has fallen down.

Bugha a 16-year-old kid from the USA won the inaugural Solo Championship and earning 3 Million USD.

League of Legends is one of the best games ever made. This title from Riot was made to create stiff competition in the MOBA-style game’s franchise which was strongly held by Dota.

League of legends was a huge success all over the world. LOL was extremely popular in the middle east which was not quite known for its Esports scene.

Riot holds a championship each and every year teams from each region have to play the regional qualifiers to qualify for the majors. League Of Legends ranked third in terms of the total prize pool.

Dota 2 is one of the oldest games on this list with the highest prize money. This tower-based defence game involves a group of 10 where 5 players face off against the other 5 to break the enemy’s tower while still defending their own.

The game has many characters and each character bring a separate gameplay style to the main game. valve conducts a huge data International each and every year. this International or Ti is one of the most heavily prized single tournaments conducted each year.

The last Ti featured a prize pool of more than 30 Million USD but due to the global pandemic, the online version of the tournament was conducted at a lower prize pool last year a.

Counterstrike was a MOD of the famous valve title half-life. The game was a huge phenomenon back in the early 2000s. The game got multiple releases over the years and the last release was CS Go. It is the No.1 esports games by the total winning prize pool.

CS Go is one of the most played games in the entire world. Valve made sure that the game remains one the top for the years to come by making it a F2P game. Cs go conduct many tournaments from majors to minors apart from the regular tournaments major tech companies like Intel conduct huge LAN events.

This game is always rising and has not given out any steam. If you are an FPS player and want to create a future in the Esports world you should definitely give a try at CS: GO.