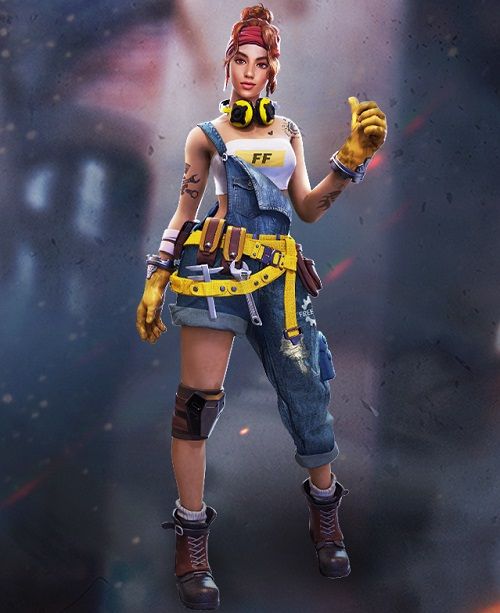 Most Underrated Free Fire Characters of All Time

In the Free Fire Universe, everyone has their favourite characters whom He/she likes to pull out in spite of what the META requires. Such Characters are not played just because they are favourite to a particular it is mainly because of the underestimation that the character has received throughout its course time. The article will feature some of the most underrated Free Fire characters of all time. These characters have so much potential if played in the right hands

Notora is one of the good female characters in Free Fire that is extremely underused and undervalued. Her skill set is extremely useful in ranked matches as people at higher tiers tend to play a little aggressively.

Abilities: “Rackers Blessing” – This ability of Notora is extremely unique, while driving any vehicle she can restore the Health Power(HP) of all allies on the vehicle by 5 Hp every 4-.5 seconds. This ability is extremely crucial while rotating into a zone as well as trying to flee a combat field when your allies are low in HP.

Real-Life Inspiration: Notora is described as a Tomboyish female motorcycle gang member. This character is inspired by the real-world actress “Kristen Stewart”. Stewart often portrays characters that have small hair and has a tomboyish appeal to them.

Shani is a character which rewards players for their aggressive gameplay . She is one of the most under picked character in Free Fire and is often looked upon in competitive gameplay .Shani when combined with characters like Chrono , A124 and Sklyer can be extremely lethal .

Abilities: “Gear Recycle” – This ability of Shani is made for aggressive players who like to push each and every squad they see. Gear recycle rewards players by restoring their armor durability when he/she gets a kill or elimination. This restoration helps the players and allies to get ready for third parties or pressure the teammates of the killed enemy. The level of armor restoration increases according to the level of the character.

Real-Life Inspiration: Shani is not based on any Real-life characters but is inspired by the generic woman character in video games. She is described as a mechanic who can literally repair everything from vest to any cars.

Nikita is one of the highest played characters by new players in Free Fire . As the players get to know to about other characters like Chrono , Skyler and DJ Alok they tend to forget about Nikita. She is regarded as a fire arm expert who can easily handle and use any guns and her ability revolves around that .

Abilities: “Firearms Expert” – Nikita being a personalized bodyguard for caroline her ability too is similar to being a bodyguard. Nikitas Firearm expert makes her reload all the SMG in the game much faster than other characters. It starts with a meager 4% and at the maximum level, she can reload her gun by 24% and more. This ability can be extremely useful in taking 1 Vs 1 as it can be handy in clutch situations.

Real-Life Inspiration: Nikita is also not based on any Real-life characters but is inspired by the Spy and agent woman characters found in video games. She goes by the name Yuna and Nikita is her secret code name. In the Free FIre universe, she is the bodyguard of caroline but actually is a secret agent who came to steal information.

Joseph is an extremely overlooked character in Free Fire Universe. His ability “Nutty Movement” helps to quickly take covers when he/she is under attack by providing them with movement speed. He can be extremely useful in both ranked and casual gameplay.

Abilities: “Nutty Movement” – From the Labs of his famous tech company he has devised a special ability that goes by the name “Nutty “. This movement enables joseph to gain instant movement speed for a period of 1 second. This ability is insanely good for passive players who like to win game games by capturing the center of the zone.

Real-Life Inspiration: Joseph is loosely based on the Tony Stark character from the Iron man franchise. He is similar to tony in many ways he has a tech company that specializes in making military-grade weapons and also has a way with girls.

Steffie is the most underrated character in the longlist of 34 characters in the Free Fire Universe. She is one of those characters who brings a lot to the table for the entire team and not for herself. Players have picked Steffie in professional tournaments and matches but the selection percentage is extremely low.

Abilities: “Graffiti’s Blessing” – This ability of Steffie allows her to draw a circle around her and allies which in turn reduces the damage intake from enemies behind a cover. This ability can be useful in situations when ur teammate or yourself are healing or while trying to add mana to your kit.

Real-Life Inspiration: Steffie is not based on real-life characters. The Free Fire universe describes Steffie as a rebellious protestor who tries to protect the rights of its citizen against the dictatorship. From childhood, she is an extremely good painter and loves to draw graffiti against the ruling government.

Disclaimer: The above mention list of most underrated Free Fire characters is the individual opinion of the writer.