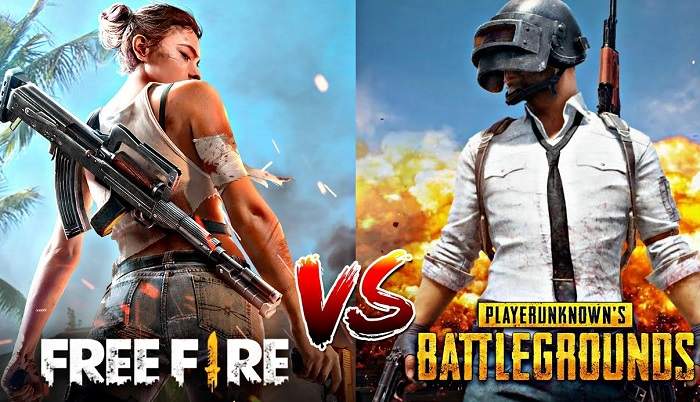 Free Fire vs PUBG Mobile: Which Game Is Better And Why?

Which is a better game PUBG Mobile or Free Fire? and which game has a better Graphics Free Fire vs PUBG Mobile? PUBG Mobile is one of the most famous games in the Mobile Esports Industry. After the Ban of the PUBG Mobile by the Indian government, a vacuum was created in the Indian Esports scene, with the surging Popularity of Free Fire in India many experts have predicted that it will fill the vacant space created by PUBG Mobile.

Free Fire and PUBG Mobile are two of the most popular Esports titles in mobile gaming history. Both the games have a huge fan following in India as well as South Asia with fans from both the titles often compare with each other in various aspects as to which is the better game. In this article, we are going to compare both the games in terms of graphics, gameplay, system requirements, In-game optimization, game updates, and Esports value.

Free Fire vs PUBG Mobile: Which Game has Better Graphics

The graphics of any game is often defined by two major aspects- Theme (Game Theme) & Game Engine. Free Fire is a semi fantasy-based battle royale that uses the “Unity -3D” Game engine. It has wonderful characters and a beautiful map design which encourages its quick play style as the lobby contains only 50 players. on other hand, PUBG Mobile is heavily inspired by realistic modern shooter titles.

It is built using the world-famous”Unreal Engine 4″.When you bump up the graphics on PUBG Mobile certain elements like Water, Shadows and colors really stand out proving that the developers have put a lot of effort into detailing these things.

The overall aesthetics of all the weapons, outfits, vehicles, and map details are equally good. At max graphics both the games look great but Free Fire at certain places looks a little saturated.

Free Fire is an extremely optimized game as Unity engine is well known for its in-game optimization. The minimum RAM requirement for the game is 2GB and the space required is 680MB.

The Game is extremely robust and can run smoothly on low-end budget mobiles too. PUBG Mobile is a well-optimized game with a minimum RAM requirement of 2GB and space of 610MB.

Over the years its has become extremely difficult to run on lower-end mobiles due to its high battery usage. Many players have reported cases of stuttering and lag while playing on budget models too.

Free Fire and PUBG Mobile both are Battle Royale games. As per the rules, a set number of players jump inside a map. The last player or team to stay alive is crowned as the champion. The major difference between both the games in terms of gameplay is the abilities of the “Characters ” and Lobby size. PUBG Mobile has a generic character set i.e all the characters are the same. Free Fire on the other hand has abilities for each and every character due to its fantasy theme.

With the introduction of a buddy system, the game became more interesting in later patches. Each player can select their own character and buddies which better suits their play style. This concept of unique characters in Free Fire brings more to the table along with the normal gunplay you find in PUBG.

PUBG Mobile has a lobby size of 100 players whereas Free Fire has 50 players because of which games tend to be a little long on PUBG Mobile.

The developers of both the games have released regular updates for their games from time to time. Free Fire releases an Elitepass at the start of each month. These elite passes contain avatar skins, weapon skins, and free rewards. Both developers always release special limited-time events to give players fresh gameplay apart from the regular battle royale. The most noted special event released in both games was the Zombie attack mode.

Conclusion: Which Game Is Better – Free Fire vs PUBG Mobile

On the other hand, Free Fire is growly immensely in India in terms of both casual players and Esports value. The choice is entirely yours if you want to Play a banned Realistic shooter go ahead and download PUBG Mobile or If you want to try a fantasy-based legal game with great Esports potential play Free Fire. Happy Gaming