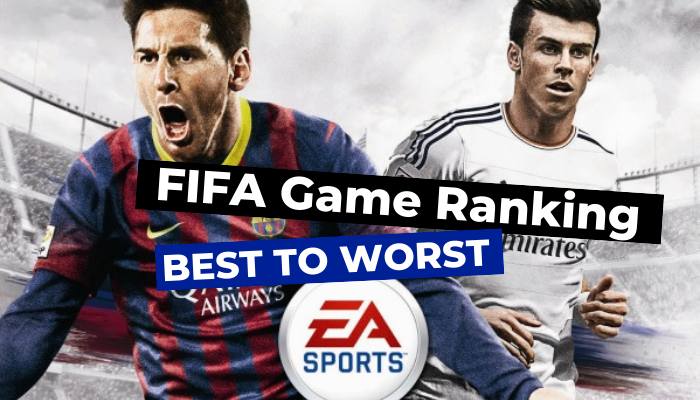 Every FIFA Game From Best to Worst Ever Ranking

FIFA is a series of association football video games released annually by EA Sports. It is one of the most famous video games in the world and is regarded as the best-selling sports video game franchise in the world. EA Sports has released every FIFA game after testing all the plus and minus but still, some editions have failed to stand upto fans’ expectations. We’re going to rank every FIFA game from best to worst.

FIFA has sold over 325 million copies of its games as of 2022 and is available in 51 countries. The first-ever game of FIFA was released in 1993. We have ranked FIFA’s games on the basis of worst to best.

FIFA 20 is without a doubt the worst FIFA game ever. It had many bugs and glitches and was miserable. Users have given FIFA 20 the rating of 1.1 which explains how pathetic the game is. Metacritic reviewer rating of FIFA 20 is 79.

FIFA 05 does slightly better than 08 just because of its marginal good user score of 7.5

The only difference between FIFA 15 and 16 is that FIFA 15 has a better user score which is 5.4

Considering the year it was launched, FIFA 02 has a commendable reviewer score of 82. It has a user score of 6.1

FIFA 07 has a user score of 7.8 which is higher than the next nine editions of FIFA.

FIFA 19 had various bugs and technical issues which explains its poor user score of 1.9 But the critic rated the game a reviewer score of 83

FIFA 01 performed extremely well and hence the game earned excellent ratings. It had a user rating of 7.3 and critics rated it 83.

Even though critics might have rated the game a reviewer score of 84, FIFA 18 failed tremendously as fans rated it a horrible 3.4.

FIFA 04 was one of the better games from the franchise with a rating of 84 from critics and a user rating of 6.4 from the fans.

FIFA 17 had a poor user score of 4.9. the only good thing about the game was the introduction of Squad Building challenges. It has a critic rating of 85.

FIFA 14 was rated 87 by the critics and 6.3 by the fans. It had good graphics and developed gameplay.

FIFA 09 will be remembered for introducing the Ultimate Team and the Be A Pro mode. Undoubtedly, the game had a high rating of 87 and a user score of 7.5.

FIFA 11 has the highest user score of 8.1 and an equally higher rating of 89 from the critics making it one of FIFA’s best games.

Changes to the specific gameplay and an upgraded and developed career mode ranked FIFA 12 with a rating of 90 and 7.2 making it FIFA’s second-best game.

FIFA 10 is the best FIFA game ever. The main reason for the game’s success was that the manager mode got a lot of enhancements. Whether it was the visual sim technology or the importance of sponsorship altering finance, FIFA 10 had exceptional gameplay and every game mode was delivered to perfection.

Those were amazing days of FIFA gaming and we hope that EA Sports would release their next, FIFA 21 better than their previous couple of editions.