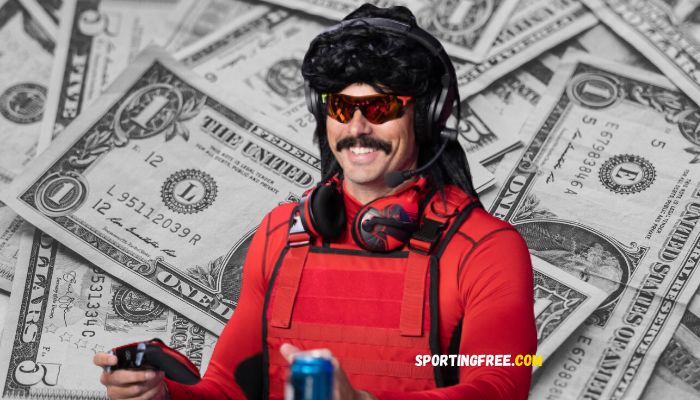 Dr. Disrespect is a very well know Personality in the world of streaming. People flock in hundreds to his stream for the over-the-top antics character he portrays as “Disrespect”. Over the years he has grown huge in numbers and this growth has always been surrounded by controversy and bans. Dr. Disrespect’s net worth major source of income comes from streamings apart from advertisement revenue and sponsorship deals. Read about one of the world’s biggest streamers’ career, earnings, and streaming setup.

Who is Dr. Disrespect?

Dr. Disrespect is one of the most entertaining streamers in the entire streaming community. It is mainly because of the Character he plays during his stream called ” disrespect”. The character he portrays is extremely eccentric and over the top which in turn makes his stream quite exciting.

He goes by the real name”Herschel Beahm” and is a married man who has a daughter too. His daughter can be often seen on his stream and also indulges her in his roleplays.

Dr.Disrespect started his streaming career on YouTube way back in 2013 when streaming was not a big thing but he quickly rose to fame even during that Era because of the eccentric character he played. But he left streaming and went to do his job as a map designer in a gaming company.

Three years later he left his job and returned to twitch as a full-time streamer and quickly rose to fame while playing his favorite games like H1Z1, Player Unknowns Battlegrounds(PUBG), and Call of Duty Warzone.

His time at Twitch has always been surrounded by the controversy he was banned twice by twitch for misconduct and not complying with Rules. In 2023 twitch Permanently banned him from the platform for a reason that is not yet fully disclosed.

Dr.Disrespect again moved back to YouTube and is streaming full-time on the platform. Currently, he has 3.38 Million followers on YouTube and continues to stream and upload videos there.

How much is Dr. Disrespect Net Worth?

Dr. Disrespect endorses a lot of gaming products and peripherals attached to it. He currently markets the Turtle Neck gaming headphones and earphones and often uses that on his streams too.

He is also a brand ambassador for razer and its products. Dr. Disrespect is one of the first streamers ever to be signed under the razer banner making way for other streamers to follow him. Gaming Fuel an energy drinks company also sells its beverages under him and has been associated with him since mid-2018.

Dr. Disrespect’s net worth is estimated at around $7 million which he mainly amassed from Subscriptions from his twitch days and brand sponsorship.

Dr. Disrespect has always been a huge fan of the COD series. Since the release of COD Warzone in 2023 Dr.Disrepect has been continuously playing and streaming the game. These are his Call of Duty Warzone Settings as of now.

Dr Disrespect is immensely famous for his funny and roasting tweets made on Twitter. He has 2 Million followers and never shy’s away from telling what’s on his mind. In 2023 he made a comment about Mobile gamers saying that “Mobile gamers are not real gamers” which in turn created unwanted controversy and backlashes from Asian countries. You can follow all Dr. Disrespect social media accounts from the following

DISCLAIMER: The above details and salary figures about Dr. Disrespect’s net worth and other details are based on trusted sources and media reports.