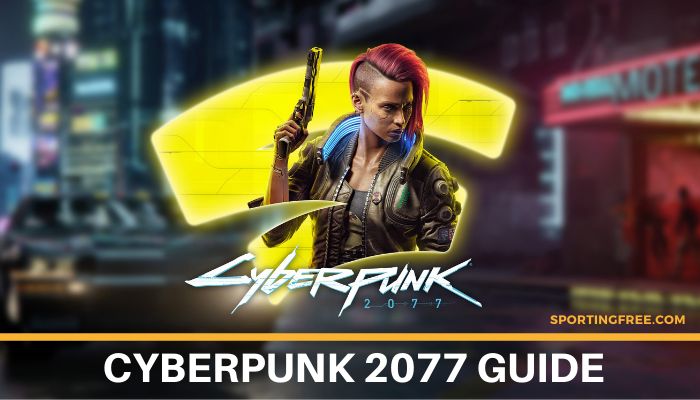 Cyberpunk 2077 Official Guide: If you are wondering what is Cyberpunk 2077 and what is the hype around it. Cyberpunk 2077 is basically a role-playing video game that is an open-world action-adventure. Its plot is set in Night City, a megalopolis overrun and obsessed with strength, glamour, and body modification. You play as a character called V, a mercenary outlaw who seeks a one-of-a-kind implant that is the secret to immortality.

You can customize your character’s cyberwar, skillset, and playstyle and discover the vast city where decisions are made to shape the tale and the world around you. The developers and publishers of this highly intense action game are CD Projekt Red and will be available on Microsoft Windows, PlayStation 4, Stadia, Xbox One, PlayStation 5, and Xbox Series X/S.

The long-awaited 2077 Cyberpunk was finally was released on 10th December. While it attracted quite a bit of criticism when it was released, there is no denying the sheer popularity, and the title of CD Projekt Red has garnered a lot of popularity during its growth.

Cyberpunk is throwing players into the vast Night City playground, which is packed with exciting activities, memorable characters, and many ways to deal with problems.

To start with CyberPunk 2077, one of the great things about this game is that players will decide how to deal with problems. The game provides various variety, whether it’s falling out of the roof window and smashing enemies with superior firepower or stealthily hacking through obstacles. That said, the game uses three intertwining systems to control the creation of characters.

Many of the acts refer to a subcategory or competence associated with ability. When players perform actions that include a particular Ability category, they will gain a unique experience with that Skill. This feeds into a Skill Advancement bar that rewards prizes at certain milestones.

Some of these are passive features related to Ability, such as increased carrying capacity for “Athletics” Skill under Body. Still, players can also gain Perk Points, which can be spent on the Perks described under each Skill.

Ability is the main trait attribute of your character. Body, Intellect and Reflex serve the more traditional functions of Power, Intelligence, and Agility, while Technological Ability and Cool give Cyberpunk twists on Engineering and Stealth, respectively. When players gain experience and level up, they are given extra points to raise these scores.

As long as you play Normal Mode or below, the weapons your enemies drop that fall to the high DPS end of the spectrum will be enough to carry you through the main plot story.

It’s easier to save your money on costly cyberware and cars, so you’re better off not purchasing weapons at a supermarket. You’re going to find weapons that are just as effective, maybe even more so, by merely completing Quests.

There is no actual reason to use anything other than clothing with the highest Armor bonus. Just like weapons, save those you find with high armor and sell the weaker ones for quick cash.

How to Use Attribute points on Cyberpunk 2077?

Intelligence will allow you to use Quickhacks on almost any computer, while 6 points in Technical Ability is sufficient to enable you to disarm the mines when the option appears. Apart from that, it’s good to keep a few Attribute Points on hand – you never know when you’re suddenly going to need to have a boost in a specific Attribute.

How to make lots of money fast in Cyberpunk 2077?

As long as you don’t end up making too many undue purchases, merely selling the equipment you pick up from the defeated enemies will be enough to make it through the storyline.

Tips, Tricks and Strategies for Cyberpunk 2077

Here is the Cyberpunk 2077 guide for the tips, tricks and strategies