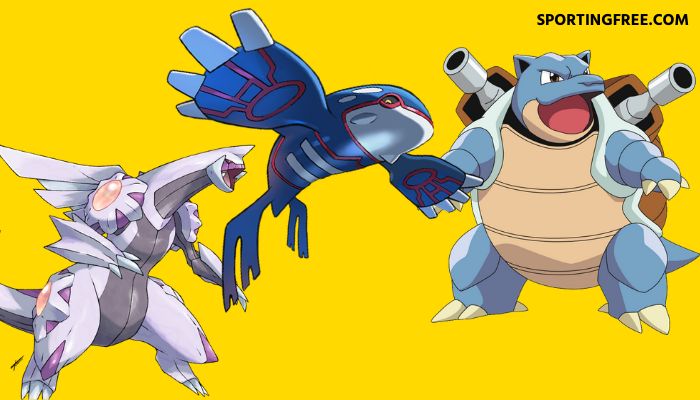 In the world of Pokémon Go, every player has their favourite class to which he/she might be inclined to build the deck. Some people may like Fire-type Pokémon’s others may like Grass-type Pokémon’s. One of the most fan-favourite class with lots of legendary, fairy and dragons are water type pokemon. From the legendary Squirtle to Kygore most of them are of water-type pokemon. In this article, we are going to see the top 5 best water-type Pokemon in Pokemon Go in 2022.

The following are the best Water Pokémon In Pokémon GO.

Palkia is a Legendary Type Water and Dragon Pokémon which has a Maximum CP(Combat Power) of 4512. Palkia at the present moment does not have any evolution state. People state that it can distort the space with its ability and can be found in the Sinnoh region. This Pokemon can be boosted by rain and windy weather.

Move Set: The Best moves of Palkia are Draco meteor and Dragon tail. It is very good against fighting Fire, Steel, and Water Type pokemon.

Weakness –Palkia is extremely weak against Dragon and Fairy-type pokemon. The best counter Pokemons are Dialga, Rayquaza and Zekrom

Kygore is one of the best water-type Pokemon in Pokemon Go with a Max CP of 4652. It currently has no evolutions in the current form and also does not possess form transition. It is heavily boosted by rain weather. Kygore was initially found in the Hunoh region and but now can be found in many regions. legend says that he can create many storms in the ocean and seas using the primal reversion and with nature’s full power he can use his true form.

Move Set: Kygore Best tactics are Waterfall and Hydro Pump. Being a Water-type Pokémon it is very Good against taking down Legendary Fire-type Pokémon’s like Charizard and Reshiram

Weakness: Kygore is very vulnerable against Electric and Grass Pokémon. IT can be countered with pokemon like Thundurus, Zekrom, Deoxys, and Electivire.

Gyarados is a water-type nonlegendary Pokémon that has a maximum combat power of 5332. It currently has two transitions from Gyarados mega and shadow form. In the mega form, it becomes water and dark type Pokémon. Gyarados is the strongest water-type Pokemon in Pokemon Go right now.

It was originally found in the Kanto region. It can be boosted in both rainy and fog-type weather in battle scenarios. Gyarados is actually a pokemon that evolves from Magikarp. Legend says that it is an extremely violent pokemon and the reason for this wild behaviour is because of his brain cell undergoing a massive transformation.

Move Set: Gyarados best move sets for attacks are bite and hydro pump. It is very good against fighting the dark, ghost, ice, and Steel-type pokemon.

Weakness: Being water and dark type Pokémon it is extremely weak against bug, electric and fairy type Pokémon. It can be countered with Pokémon’s like mega venusaur , Lucario and zekrom .

Swampert is a nonlegendary water and ground type Pokémon which has a maximum CP of 3362. It was also originally found in the Hoenn region but now can be found in other regions too. Swampert can be found in two transition forms one in shadow form and another in normal form.

Swampert is a very strong Pokémon that can lift more than a ton and like it, names suggest lives in a swamp or areas surrounding it. This Pokémon can be boosted by sunny and rainy weather conditions.

Weakness: In its shadow form it is a combination of both water and ground type pokemon so it’s very weak against grass, electric and dragon-type pokemon. The best pokemon to counter Swampert are Roserade, sceptile and tangrowth .

The most popular water Pokemon, Blastoise which is a nonlegendary type water Pokémon that has a maximum CP of 4455. It was also originally found in the Kanto region in the earlier generations. Blastoise is the best water-type Pokemon in Pokemon Go.

Blastoise is found in two forms one in the mega form and another in shadow form. In shadow form it becomes a combination of both water and dark Pokémon It is boosted by Rainy weather conditions.

Legend says that Blastoise can shoot a bullet of water from his cannon fitted on its back and can be lethal till 200 m. Blastoise is a pokemon that evolves from Squirtle.

Weakness: The main weaknesses for Blastoise are Electric and Grass-type pokemon. It can be countered with pokemon like Mega Manectric, Zekrom, and Zapdos.