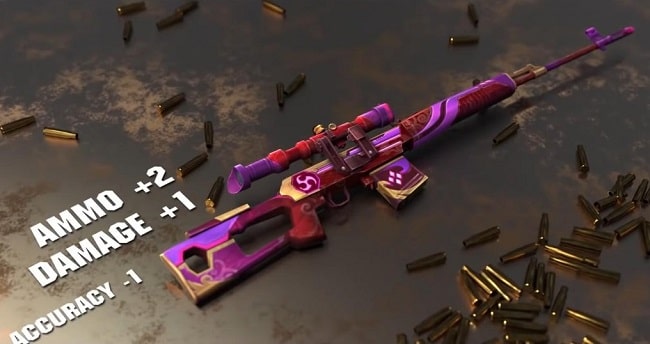 Sniper rifles are a key part of any players weapon loadout & determine the style of play a player will adapt inside the game. Free Fire consists of various DMR & sniper rifles, and new players often find themselves in a confusing state in picking a sniper rifle. Don’t worry, at SportingFree; we are ranking the best sniper rifles in Free Fire in 2022.

Draganov or popularly called SVD, is an automatic sniper rifle which means that the weapon does not require a reload after taking a single shot. It can only be found inside a Drop Crate or at Resupply Station and will not be spawned on the ground.

The main highlight of this weapon is its high amour penetration rate; an enemy will come easily with their complete armour (Level 1) by a single shot from SVD.

The downside to the gun is its high recoil pattern which can be extremely difficult for new players to master & control.

Kar98k is a bolt action type rifle found inside the game. The weapon can be found on the ground as a ground weapon and cannot be found inside a crate or resupply station.

It is one of the best sniper rifles inside the game and can rival our top pick if not for its low headshot multiplier.

The gun is straightforward to use for new players and can be customizable with various scopes. The main con of using a kar98k is its low fire rate & range when compared with other snipers on the list.

The recoil spread is also very low compared with Draganov without any attachment; with attachment, the gun is straightforward to use and works like a charm.

People can also use this weapon from the mid-long range making it one of the versatile rifles on the list. SKS also a high armour penetration that can easily take down a Level 2 vest with 2-3 shots.

The M82B is one of the best snipers to be found inside the game as a ground weapon. The Gun is extremely easy to use and can break a gloo wall easily with one shot & has very high armour penetration, which can easily take down a Level 3 vest with just 2 shots.

Another important feature of M82B is that it can give extra damage to vehicles & gloo walls apart from the base damage. This bonus damage can extremely be useful against higher-ranked teams rotating into a zone by attacking their vehicles or Gloo Walls.

The main downside to this gun is its extremely low rate of fire, but it is usually matched up with its good damage power.

Rounding off the list at SportingFree for the best sniper in Free Fire is AWM or Arctic Warfare Magnum. This weapon is only found in the Drop Crate and does not spawn on the ground.

AWM is often called the King of Snipers in Free Fire and almost in all games where the weapon features. It is extremely easy to use with no to none Recoil, Extremely high damage & Rate of Fire. With Right Attachments like Muzzle fire, Silencer & SniperPads, the Weapon Transforms itself into a beast.

This is the only sniper in the game which can one-shot kill any enemies even if you deal a body shot to them irrespective of the helmet, vest, or special powers they possess.